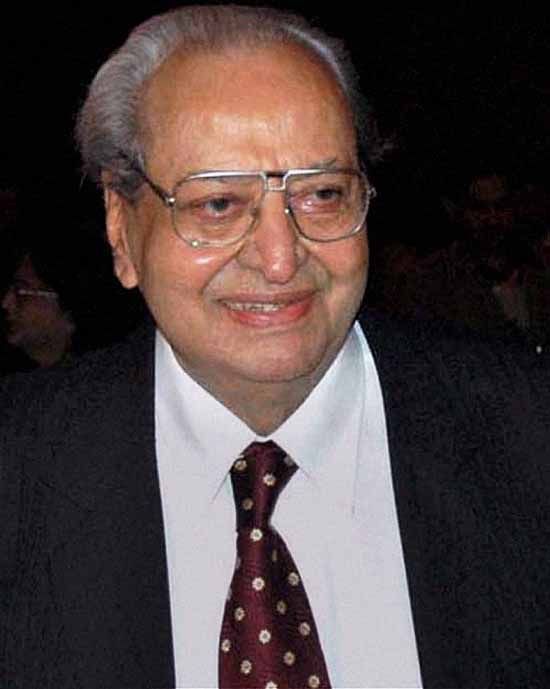 The final journey of legendary actor Pran began this morning. The Dadasaheb Phalke awardee died after prolonged illness at Lilavati Hospital last night. He was 93.

Family, fans and close friends came together to give a final farewell to acting legend Pran.

The legendary actor is survived by his wife Shukla, daughter Pinky, and sons Arvind and Sunil.

The last rites of Pran Krishan Sikand, known to his fans only as Pran, were performed by his sons at Shivaji park crematorium in Dadar at noon.

"It is indeed a very sad day for us. The last rites were performed by both the sons," daughter Pinky told PTI.

A host of Bollywood celebrities, both old and young, had taken to Twitter to express their grief following the thespian's demise.

Born into a wealthy family in Delhi, Pran lived and was educated in Lahore. He pursued a course in photography in Lahore before a chance meeting with writer Wali Mohammad Wali got him a role in a 1940 Punjabi film Yamla Jat in which he played the hero opposite Noorjehan.

After partition, Pran moved to Mumbai, then Bombay, in 1945, initially without much success.

He tasted success with Dev Anand-Kamini Kaushal starrer Ziddi, a role which he had landed with the help of Pakistani writer Saadat Hasan Manto and actor Shyam. There was no looking back for him after that.

Pran appeared in over 400 films since the 1940s, essaying both negative and character roles, with equal ease. Pran played villain to all top heroes of his time--from Dilip Kumar to Dev Anand to Raj Kapoor, Shammi Kapoor, Dharmendra, Rajesh Khanna and Amitabh Bachchan.

In his private life though, Pran was a gentleman, far removed from the dark characters he played on screen.

Pranab Mukherjee, President of India - I am deeply saddened to learn about the passing away of your husband, Shri Pran Krishan Sikand. Shri Pran was a highly talented actor who shall always be remembered by generations of film watchers for his versatile and vivacious acting in multifarious roles.

In his passing away, the celluloid world has lost a veteran and acclaimed actor whose contribution to the Indian film industry remains unparallelled

Mamata Banerjee, West Bengal CM" - He would always be remembered and adored by film lovers for his immortal roles in Zanjeer, Amar Akbar Anthony, Madhumati, Kashmir Ki Kali, Don and a host of other films," Banerjee said in a Facebook post.

Nitish Kumar, Bihar CM - Pran is known as veteran villain and character actor. His contribution to Indian cinema will never be forgotten,

Bhupinder Singh Hooda, Haryana CM - The veteran actor will be long remembered for his iconic roles.

K Sankaranarayanan, Maharashtra Governor - "Pran was a versatile film personality who with his brilliant performances set standards of good acting. Quite often, people admired the hero at the end of the film, but remembered Pran Saheb ever after because of his memorable roles. He brought dignity to the characters essayed by him, and that was his strength."

"The history of the Indian cinema during the last six decades will be incomplete without a reference to his name and immense contribution. I pay my respects to this superb actor and a good human being."