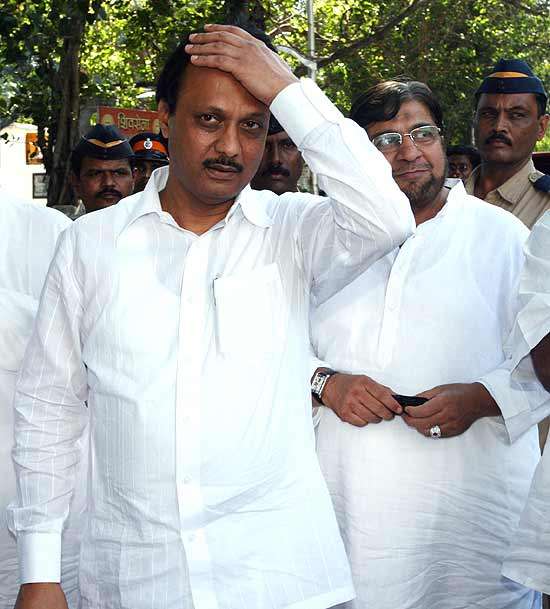 The state's Anti-Corruption Bureau has been asked to institute 'open inquiries' against Pawar and state NCP president Sunil Tatkare in connection with alleged corruption and irregularities in execution of various irrigation projects during their tenure as Water Resource Ministers.

The Chief Minister also gave his approval to ACB's proposal to conduct an open inquiry into allegations of corruption and favouritism against former Public Works Department Minister Chhagan Bhujbal in construction of Maharashtra Sadan in New Delhi and two other government buildings in Mumbai built under Private Public Partnership.

The government has also ordered probe against irrigation department officials and contractors responsible for alleged irregularities.

"I have been authorised by Chief Minister of Maharashtra to state that he has cleared open inquiries by ACB against Ajit Pawar, Sunil Tatkare and Chhagan Bhujbal," Advocate General Sunil Manohar told the Nagpur bench of the Bombay High Court.

Manohar said Fadnavis had asked the ACB to go ahead with probe against the three top NCP leaders in the alleged scams in which several thousand crores of rupees were siphoned off with the connivance of greedy contractors and pliant officials.

A division bench of the court comprising Justices Bhushan Gavai and V M Deshpande recorded his statement and disposed of PILs demanding investigation.

"When big-wigs are being probed along with officials and contractors, there is no point in keeping these petitions pending," the court observed while making it clear that petitioners can always approach it again, if they are not satisfied with the inquiry.

The Anti-Corruption Bureau had proposed open inquiries against Pawar and Tatkare in the irrigation scam, and former PWD minister Chhagan Bhujbal in the Maharashtra Sadan scam.

Raj Bhavan sources had told PTI on Monday that the files from ACB, which were received during the President's rule (prior to October elections), had been forwarded to Chief Minister's office.

Media reports had alleged that Pawar, who was Water Resource Minister for a decade between 1999 and 2009, had cleared 38 projects worth Rs 20,000 crore in 2009 without clearance of Governing Council of Vidarbha Irrigation Development Corporation (VIDC).

According to reports, Pawar and VIDC executive director approved the projects without placing it before the governing council comprising state's Chief Secretary and officials of the finance, planning, agriculture and water resource departments for deliberation and clearance, as mandated under the rules.

It had also been alleged that tenders were approved at inflated rates.

Fadnavis' predecessor Prithviraj Chavan had announced that a white paper will be brought on the status of irrigation projects after state's economic survey revealed that only 0.1 per cent additional area was brought under irrigation in a decade despite a whopping Rs 72,000 crore being spent during the period.

An NGO--Jan Manch-- had filed a PIL before the Nagpur bench in connection with the irrigation scam alleging "fraud on the Constitution" with regard to article 371 (special provision with respect to Maharashtra and Gujarat) as a result of swindling of funds meant for irrigation projects, depriving the backward region of Vidarbha of irrigation facilities.

Under Bhujbal as PWD Minister, the government had entered into an agreement with a contractor for building three structures — the Maharashtra Sadan (state’s official guest house in Delhi Lutyens’ zone), another state guest house (High Mount) at Malabar Hill, and a new administrative building and residential quarters for the Regional Transport Office at Andheri — on a PPP basis.

Bhujbal has faced accusations of misusing his official position in awarding the contract for Maharashtra Sadan to an associate not known to be a contractor capable of executing such projects. The cost of the project had also reportedly escalated several times over original estimates.

BJP leader Kirit Somaiya had approached ACB seeking an inquiry against Bhujbal, alleging his friends and family-owned companies were involved in several non-transparent and corrupt transactions, using a web of firms to park the money earned through illegal means.

Reacting to the government's decision, Ajit Pawar said he had no issues over the probe and that "truth will come out".

"It's their (BJP's) government. So they are free to do what they want. We do not have any problem with it. Truth will come out when the enquiry is done," Pawar said.

Tatkare said NCP had been "clean" from day one and that they will extend "complete support" to the investigative agency.

"Let them (the government) do what they want to. We will support it completely. We have been clean from day one and whatever work we have done (in the irrigation sector) has been scientific. We do not mind any inquiry against us," he said.

Jan Manch had also filed five different reports in the High Court which contained observations against the officials of VIDC.

These reports included those by government officials Nandkumar Vadnere and H Mendhegiri, besides from Central Water Commission (CWC) and Comptroller and Auditor General (CAG). Citing CAG report, the PIL had highlighted that within a span of just seven months in 2009, cost of 38 irrigation projects under VIDC had escalated by a whopping Rs 20,050.06 crore -- from Rs 6,672.27 crore to Rs 26,722.33 crore.

The previous Congress-NCP government had opposed various PILs on irrigation scam, including the one by Jan Manch, citing technicalities.

The High Court had on August 23, 2013 rejected the preliminary objections after perusing the material on record.

It had wondered why the government was seeking dismissal of the PILs at the threshold and not permitting the court to even look into "alleged wrongdoings when PILs were not an adversarial litigation".

The supreme court had dismissed the special leave petition filed by Vidarbha Irrigation Development Corporation against the hearing of the PILs.

Ajit Pawar, nephew of NCP chief Sharad Pawar had resigned as Deputy Chief Minister in September 2012 after Prithviraj Chavan's announcement about bringing a white paper on the alleged irrigation scam. As other NCP ministers threatened to follow suit, the government had plunged into a crisis.

However, Pawar had returned as Deputy CM in the first week of December after he was given a 'clean chit' in the white paper.

Meanwhile, ruling BJP has described Fadnavis' decision as the "first step in fulfilling assurances" given to people of Maharashtra.

"For the last five-six years, we had started raising demand for a probe into the corruption cases. The approval by Fadnavis to ACB is a logical end to that campaign and the first step toward fulfilling promises we made to people," BJP spokesperson Madhav Bhandari told PTI.

The 43-day-old Fadnavis government no longer needs NCP's outside support for survival after Shiv Sena joined the government, giving the new dispensation a complete majority in the Assembly.

However, Fadnavis said he had given the nod for probe almost a fortnight before Sena joined the government.