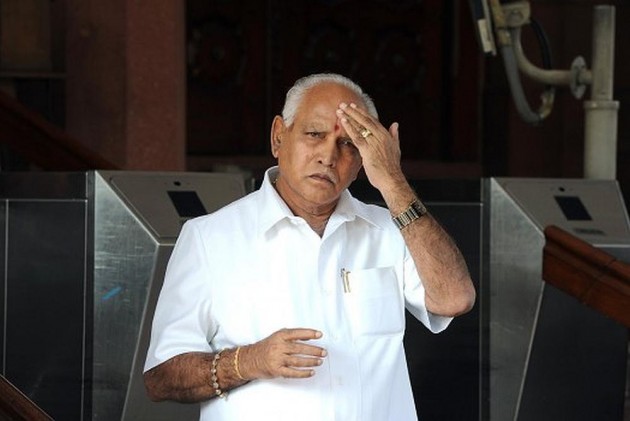 Cracking down on the feuding factions of the party's Karnataka unit, the BJP central leadership has relieved two office bearers each from the state President B S Yeddyurappa and senior leader K S Eshwarappa camps, of their charges.

It also barred party members from participating in the activities of Rayanna Brigade, an apolitical forum of Dalits and backward classes floated by Eshwarappa in an apparent show of strength, and also asked them not to talk about party’s internal affairs in public and in media.

The party's factional feud had intensified on April 27 with Eshwarappa holding a convention to "save" the organisation in defiance of the warnings by Yeddyurappa's camp against it.

While Bhanuprakash and Surana had shared the stage with Eshwarappa at the convention, Renukacharya and G Madhusudhan considered close to Yeddyurappa had made public statements targeting national joint general secretary (organisation) B L Santhosh.

Yeddyurappa has earlier too blamed Santhosh, perceived to hold significant sway over the party affairs in the state, for scripting dissidence activities.

Clarifying that there was no link or relationship between the BJP and the Rayanna Brigade, he said in a statement that the BJP office bearers, leaders and workers are strictly barred from participating in the Rayanna Brigade's activities.

“The party’s central leadership has instructed the functionaries not to organise any activity connected with any brigade or other kind of organisations,” he added.

Also stating that airing views on party's internal affairs in public and in media has been prohibited, Limbavali warned that “strict disciplinary" action will be taken in the event of anyone violating these instructions.

Meanwhile, the party sources said Eshwarappa, who was scheduled to meet Muralidhar Rao today, has decided to skip the meeting.

Speaking to the reporters in Tumkuru, Eshwarappa, the leader of the opposition in the legislative council, ruled out the possibility of the party taking any action against him.

The senior leader said he was “deeply pained” by the action against Bhanuprakash and Surana, noting that they have served the organisation for years.

"What is there to seek report about me from Muralidhar Rao? There is nothing, some one is creating such things... Every one at the centre knows about my contribution to the BJP organisation since the beginning...," he said in reply to a question.

Reminding that he had served as party’s state and yuva morcha presidents, Eshwarappa said “When Yeddyurappa quit the party and formed the KJP, I resigned as the power minister on the directions of the party and took over as the party's state president.

"So I don’t think there is any question of taking action against me.

"Why will they take action against workers who have toiled to build the organisation?” he asked.

The resentment has been brewing within the party over Yeddyurappa's alleged "unilateral" style of functioning after the appointment of party office-bearers and "ignoring" loyal workers and the old guard of the party.

The fissures within the Karnataka unit have been causing concern among the central leadership which has been hoping for the revival of party's fortunes in the assembly polls early next year and to see the BJP return to power.