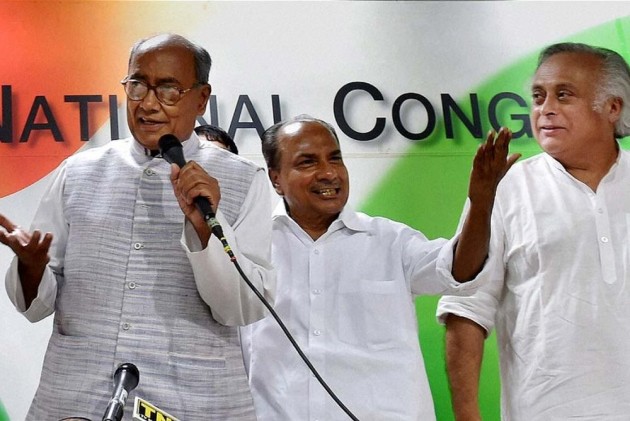 Facing flak for his handling of the Goa polls, AICC General Secretary Digvijaya Singh today said his proposal for a pre-poll alliance with Goa Forward was "sabotaged" by his own party leaders.

He said had the alliance with Goa Forward gone through, the Congress would have got majority in the state and that it was unfair to now make him a "villain".

"As a strategy I had proposed a secular alliance with regional party headed by Babush Monserratte and Goa Forward headed by Vijai Sardesai," Singh said in a series of tweets.

The Congress had supported Atanasio (Babush) Monserratte's United Goan party in Panaji constituency and given tickets to four of his supporters.

"Goa Forward won 3 out of 4 (seats) they contested. Had our alliance with Goa Forward gone through we would have been 22," he said in another tweet.

"Still Digvijaya guilty? I leave it to you to judge," the senior Congress leader said.

He said that while the Congress is being blamed for deciding late on its legislative party leader in Goa, the BJP is yet to decide its leader in Uttar Pradesh and Uttarakhand.

"Congress was blamed for being late in deciding its Leader. BJP yet to decide leader in UP and Uttarakhand. Results came on 11th evening," Digvijaya said.

He said the Congress Legislative Party leader for Punjab was decided on March 13 and for Manipur and Goa on March 12.

"In Manipur there was a sitting Chief Minister in Goa 4 Ex CM got elected as MLAs but we chose the leader on 12th," Singh said defending himself.

"Letter to Governor goes after the leader is chosen, which we did but the Governor took the decision before that," he said.

Singh said that when took over as incharge of the party in Goa, the organisation was in a "disarray."

"When I and Chella Kumar (AICC Secretary) took charge of Goa in 2013 out of 9 Congress MLAs only six were active (and) the whole organisation was in a disarray," he said.

"Even Congress Leaders were predicting 2-4 seats (in Goa polls) for Congress," he said in another tweet.

Singh said it was unfair to make him a "villain" in the present situation.

Without taking any name, he said, "A senior Hindi TV Journalist who has a flat in Goa and who was very active for Congress in 2012 election predicted a clean sweep for AAP."

Despite the Congress winning 17 out of the total 40 seats in Goa Assembly polls, the party failed to form government.

The BJP, which won 13 seats, cobbled up alliances with smaller parties like Goa Forward, Maharashtrawadi Gomantak Party and independents to form government in the state.

The Manohar Parrikar government yesterday proved its majority on the floor of the Goa Assembly by winning the trust vote with the support of 22 legislators in the 40-member House.

The Congress, the single largest party with 17 MLAs, suffered a jolt as its legislator Viswajit Rane resigned from the membership of the Assembly, after refusing to vote against the trust motion defying the party whip.

Reacting to Rane's resignation, the AICC General Secretary accused him of having a liaison with Goa Chief Minister Manohar Parrikar.

"Who was most vocal in criticising Congress Observer in Goa. Vishwajit Rane," he said.

"What was he doing when CLP leader was being chosen? Having coffee with Parrikar in a hotel when we were choosing CLP leader," Singh said.

Rane had yesterday resigned as member of the Goa Legislative Assembly and also quit the party after absenting himself from voting during the crucial floor test.

The 45-year-old leader did not rule out the possibility of joining BJP, saying "all options are open".

Rane, son of Congress veteran and former chief minister Pratap Sinh Rane, said he was upset with the party leadership as it failed to form the government in Goa despite people giving it a mandate in the Assembly polls.