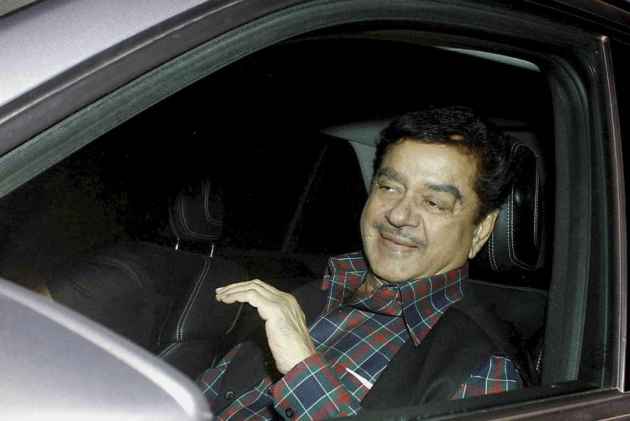 Print
A
A
A
increase text size
Outlook May 22, 2017 15:51 IST 'Enough Of Negative Politics,' Tweets Shatrughan Sinha, Sushil Modi Wants The 'Traitor' Out

Senior BJP leaders Shatrughan Sinha and Sushil Kumar Modi were today engaged in a twitter war over the party's stance on RJD President Lalu Prasad and Delhi Chief Minister Arvind Kejriwal on the issue of corruption.

"Enough of negative politics and mudslinging by opponents on our political leaders, be it Kejriwal, Laloo Yadav or Sushil Modi," Sinha said in on Twitter drawing sharp reaction from senior BJP leader Sushil Kumar Modi who sought removal of "gaddars" (traitors) from the house.

Enough of negative politics & mudslinging by opponents on our political leaders, be it Kejriwal, Laloo Yadav or Sushil Modi..High time..1>2

..time to substantiate your claims..or pack up! Can't just keep feeding media with one night stories & sensationalising. Enough is enough!

Individually I hold all political leaders, esp Kejriwal, in high esteem for their credibility, struggle & commitment towards society...1>2

Our BJP surely believes in honesty & transparency, which seldom go together, but must go together. An allegation is ONLY THAT unless proved!

Actor-politician Sinha, who is a second term Lok Sabha member of BJP from Patna Saheb, has been sulking ever since he was ignored during 2015 Bihar assembly poll. His statements and freewheeling exchange of pleasantries with rivals, Bihar Chief Minister Nitish Kumar and RJD President Lalu Prasad, have on several occasions put the party in an embarassing situation.

"Our BJP surely believes in honesty & transparency, which seldom go together, but must go together. An allegation is ONLY THAT unless proved!," Sinha further wrote on his micro blogging site.

His assertions drew sharp criticism from senior party leader Sushil Kumar Modi, who has levelled series of allegations against Lalu Prasad and his family of acquiring "benami" property worth Rs 1000 crore.

He also said "it's not necessary that those who are popular should be relied on...'Gaddars' (traitors) should be removed from the house at the earliest," Sushil Modi said.

When his reaction was sought on Sushil Modi's comment, Shatrughan Sinha popularly known as "Bihari Babu" told PTI over phone, "I do not want to make any comment. I am still fond of Sushil Modi. I have just spoken logically."

However, sources close to him made stinging remarks on Sushil Modi particularly on his "traitor" comment.

RJD spokesman and MLA Shakti Singh Yadav said that Sinha had the habit of speaking the truth.

"He has spoken his 'Maan ki Baat' with which many other BJP leaders agree but do not have courage to speak," he said.

"The man who launched BJP when it was merely a party of two MPs has been sidelined within the party. This reflects character of BJP," Sanjay Singh said.

Continue FREE with Ads Pay Rs. 1 to Read Without Ads
READ MORE IN:
Sushil Modi Shatrughan Sinha National
Next Story : Rajinikanth Should Stick to Acting, He Has No Idea About Constitution, Says Swamy
Download the Outlook ​Magazines App. Six magazines, wherever you go! Play Store and App Store