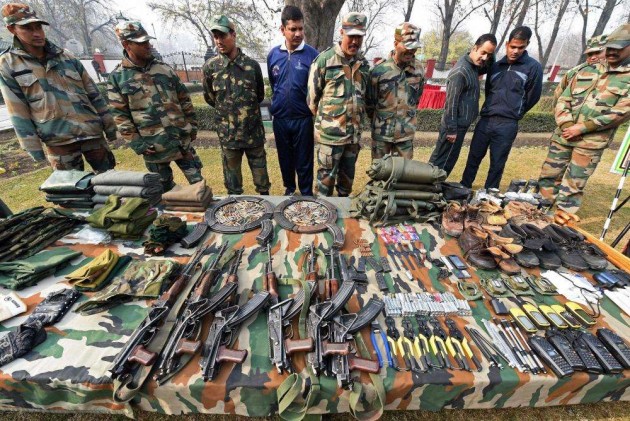 The Army today said it had enough evidence to show that the six terrorists who carried out the attack on an Army camp in Uri belonged to Lashkar-e-Toiba(LeT) and supported by Pakistani establishment and were highly trained for special operations.

It also said that the slain militants were looking to hit civilian targets to create fear ahead of the third of the five-phase polling in Jammu and Kashmir on Tuesday.

General Officer Commanding(GoC) of Army's 15 Corps Lt General Subrata Saha said the GPS recovered from the slain militants showed that there is a staging area north of Jhelum on the other side of Line of Contol(LoC).

"One infiltration took place in Tut Mari Gali (Nowgam Sector) and one in Uri sector. I am not revealing the exact location (of the staging area) for obvious reasons," he told reporters.

Saha said the incidents in Nowgam sector, in which six militants and a JCO were killed, and in Uri sector on Friday were not routine infiltration attempts.

"To say it was a routine infiltration would be improper. The sequence in which the events have happened and if you see the numbers and levels of training that has gone in to preparing these people, it is not an ordinary infiltration. It is linked to the larger events that are taking place here," he said, referring to ongoing elections and Prime Minister Narendra Modi's visit to Srinagar tomorrow.

Eleven security personnel including eight soldiers were killed in the pre-dawn attack on the Army camp on Friday in Mohra in Uri sector by militants, who had infiltrated from Pakistan-occupied Kashmir(PoK), before all the six assailants were shot dead.

The army commander said there was enough evidence to show that the assailants were supported by the Pakistani establishment and that the attack and other incidents before it along the LoC in Kashmir were coordinated and synchronised.

"We have enough evidence that both the groups were from the Lashkar-e-Toiba. The markings on the warlike and logistic stores whether it is food, ammunition, medicines or clothes, clearly indicates that they were of Pakistani manufactured and origin. The terrorists were heavily armed and they had enough food to last several days," he said.

He said the incidents that took place during the month of November indicate that there was a coordinated attempt from across the LoC to disrupt the electoral process in Kashmir.

Gen Saha said the militants killed in the two operations this month including the Uri attack were highly trained and capable of carrying out special operations.

"There is no doubt that they were highly trained terrorists. The TMG infiltration took place in high altitude and snowy conditions. To infiltrate in these conditions, one requires high level of physical fitness. The second operation on Mohra, they crossed Jhelum by foot, which obviously requires high level of training. I would say these terrorists were capable of special operations," he said.