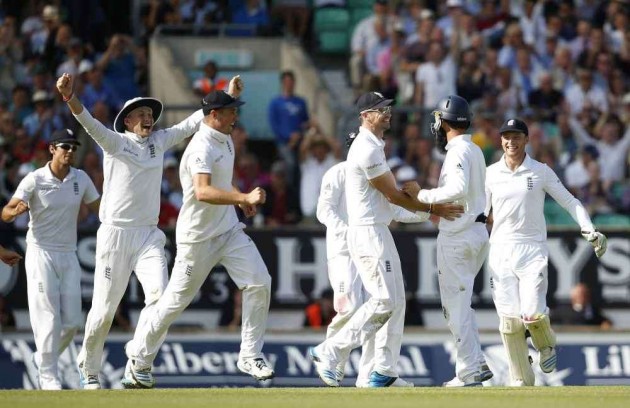 India's recent saga of spineless performances touched a new low as they crashed to a humiliating innings and 244 runs defeat well inside three days in the fifth and final cricket Test against England, who clinched the series with a 3-1 margin, here today.

It was yet another abject surrender by the batsman, who were shot out for 94 in just 29.2 overs as they continued their embarassing display succumbing to their heaviest Test defeat in 40 years.

This was after England took a gigantic 338 runs lead with a healthy first innings score of 486 riding on a brilliant 149 not out by Joe Root. The series win enbaled Alastair Cook and his boys to retain the Pataudi Trophy for the second straight time in three years.

While statistically, it was not a 'Whitewash' like the last time in 2011 when India lost 0-4, but once the script took a different turn in Southampton, it had only been a case of humiliation of Mahendra Singh Dhoni's men, who simply were not good enough to put up a semblance of fight against a rampaging English outfit, running all over them.

The likes of Gautam Gambhir (3), Cheteshwar Pujara (11), Virat Kohli (20) whose faulty techniques in adverse conditions was cruelly exposed by the likes of Jimmy Anderson, Stuart Broad. While Kohli did not have a clue about how to tackle deliveries shaping away, Pujara was all at sea against the ball coming into the right-hander.

It was ironical that India lost two Test matches with a total playing time of five days -- which is the duration of a single Test match.

It was near-impossible to prevent a landslide victory for England but opener Murali Vijay (2), who had a decent first half of the tour got an incutter from Anderson was adjudged leg-before.

Gautam Gambhir (3) didn't slide the bat in as he was a feet short off the crease failing to beat a direct throw from Chris Woakes. While India went into the lunch at 9 for two, the writing was there on the wall.

Chris Jordan (4-18) and James Anderson (2-16) once again hassled the visitors as the Indian batsman were unable to cope with their swing bowling skills in better conditions for a second match running.

Stuart Broad (1-22) and Chris Woakes (1-24) were the other wicket-takers as India's score-card was again a disappointing reading with only three batsmen able to reach double figures.

Pujara and Kohli then started off post-lunch in a bit to rediscover their form and for a brief period of play they did look better than they have previously in the last three matches.

It didn't last long though as they added only 21 runs for the third wicket, the highest for the Indian innings. Pujara was then caught behind off an unplayable delivery from Anderson as the slide began.

Ajinkya Rahane (4) came to the crease and pushed and prodded his way for some time before he was dismissed in the same manner five overs later as Gary Ballance pulled off a stunning one-handed catch at third slip.

Five balls later came the death blow as skipper MS Dhoni (0) was caught tamely at forward short leg and India were once again struggling at 46/5.

Kohli atleast managed to get them past the 50-run mark but it wasn't enough to salvage any pride. The batsman then was dismissed in the 24th over, looking to clip the ball on the leg-side but only edging to first slip.

Jordan then upped the ante and quickly scalped R Ashwin (7) and Bhuvneshwar Kumar (4) in the space of five balls in the 26th over.

Varun Aaron (1) was run-out an over later. The end came as Ishant Sharma (2) was unable to fend off a short ball and lobbed the ball up for Moeen Ali to finish India’s misery. Stuart Binny remained unbeaten on 25* (28 balls, 4 fours).

India's misery had been compounded in the morning session when trailing by 336 runs they lost two quick wickets as soon as they started their second innings.

Murali Vijay (2) was trapped LBW by a sharp in swinger from James Anderson (1-1) while opening partner Gautam Gambhir (3) was foolishly run-out off the first ball of the 7th over as rain forced an early lunch break. India still trail England by 329 runs.

Starting at the overnight score of 385/7, India were looking for an early end to the English innings. But Root had other plans.

First he reached his fifth Test hundred in the third over of the day – 108th of the innings – having faced 135 balls, with 10 fours and 1 six. The visitors had some luck in that over though with Ishant removing Chris Jordan (20 runs, 33 balls, 2 fours) ending his 82-run partnership with Root.

But the visitors were in for some more punishment as new batsman Stuart Broad opened up as soon as he arrived at the crease.

He scored off every delivery until the 11th ball that he faced, taking 27 runs off his first 10 balls. Root was bowled in the 110th over by Ishant but it was deemed a no-ball. He too then started playing some aggressive strokes as the Indian bowling was taken to task, scoring 49 runs off the next 30 balls he faced.

In the first hour, India bowled only 11 overs but conceded a massive 98 runs. Root and Broad added 63 runs for the ninth wicket off just 6.4 overs with a scoring rate of 9.45 runs per over. Broad was finally caught at gully off a short ball from Ishant, after scoring a quick-fire 37 runs off 21 balls, with 5 fours and 1 six.

Ashwin then brought an end to the innings dismissing James Anderson (1) cheaply but the match was already out of India's hands by then.