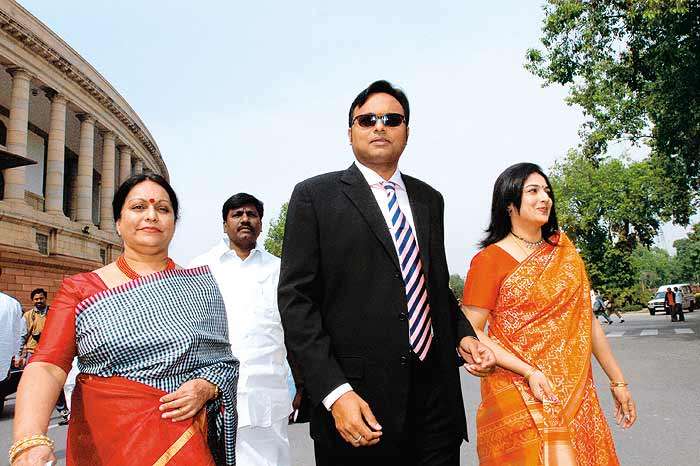 Enforcement Directorate (ED) today searched the office of Karti Chidambaram, son of former Finance Minister P Chidambaram, in connection with its probe against firms owned by his friends.

The ED action invited strong criticism from Chidambaram Sr who said "nothing was found" in the "fishing and roving" enquiry and he would like to see how far a "foolish" government would go in "harassing" him.

Karti Chidambaram issued a statement that some officers of the investigating agencies visited his office today.

"I was informed that they are investigating three firms. Two of the firms belong to my friends. They are owned by professionals and managed by competent Board of Directors. I am not aware of the third firm," he said in the statement.

ED officials said they searched a room they had locked in the office premises of Karti as part of their operation that was executed on December 1. "Some documents have been seized," they said.

Officials said the room could not be opened on December 1 and was sealed. It was opened today and Karti was informed accordingly, they said.

Karti, in his statement, reiterated he had no "economic interests" in the firms being investigated by the probe agencies as he expressed surprise over the action conducted today.

"I made it clear to the officers what I had publicly stated earlier. Neither I nor any member of my family is a shareholder or Director of any of the said firms. We do not have any economic interests in the said firms," he said.

Karti said he had no doubt that the two firms owned by his friends will "answer any questions put to them and clear any allegation made against them."

"As far as I am concerned I maintain that there was, and is, no basis for them to have visited my office or to make any enquiries in my office," Karti said.

While the ED is probing the case under the provisions of the Foreign Exchange Management Act (FEMA), the Income TAx department is investigating it on charges of alleged tax evasion.

Reacting to ED's action today, Karti's father P Chidamabram, who had last month accused the government of a "malicious onslaught" launched by it against his family, said his son has made a statement.

"As can be expected, nothing was found in the fishing and roving enquiry. I would like to see how far a foolish government will go in harassing him.

"I still believe that the departments I left behind have many officers who will act according to law and their conscience," Chidambaram senior said.

Meanwhile, the Enforcement Directorate issued a late evening statement in Delhi stating it was "incorrect" to say it has conducted fresh searches today.

"It was actually left over search of December 1 which was concluded today," it said.

The agency, in the statement, gave a background of the operation done earlier this month saying while it had conducted searches at the premises connected with Ms Advantage Strategic Consulting Private Limited in Chennai on December 1, an official of the said firm Mohanan Rajesh told its sleuths that some of the documents relating to the firm are lying in the premises of Ms Chess Global Advisory Services Private Limited in Chennai in which "Karti is one of the Directors".

"Accordingly the search was conducted in the said premises. Evidences related to Ms Advantage Strategic Consulting Private Limited were found at Ms Chess Global Advertising Services Private Limited. However, one of the rooms in the premises was found locked and the team was intimated that the key of the room is with Karti Chidambaram, who had gone abroad.

"The room was therefore sealed and on return of Karti the search process was resumed in his presence," it said.