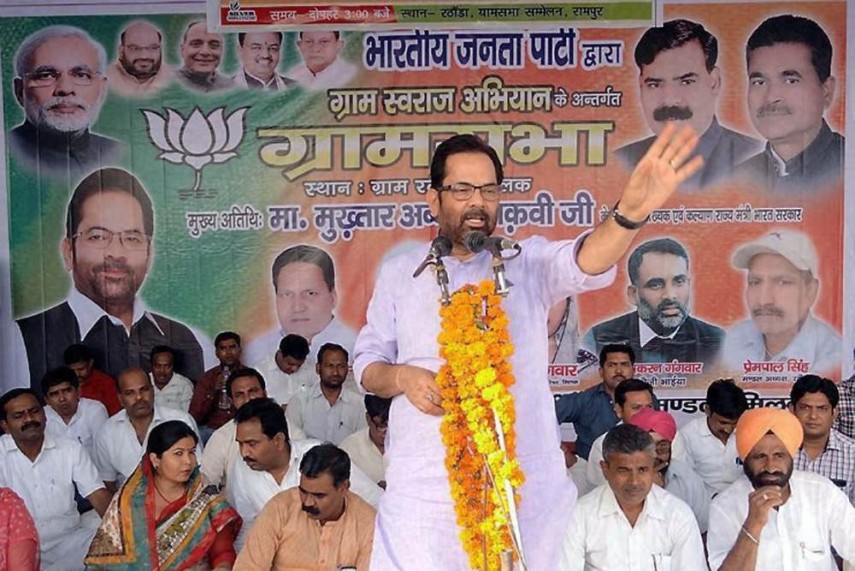 Communal incidents have declined significantly since the Narendra Modi dispensation assumed office and no such major episode occurred in the near 32-month period, Union minister Mukhtar Abbas Naqvi said today.

Addressing the inaugural session of the annual conference of state minority commissions here, Naqvi hailed the Modi government for creating an atmosphere wherein minorities are becoming part of the country's development process.

He, however, cautioned the political establishment of the country to remain alert and work with honesty for empowerment of minorities as he said that its accountability will be tested every six months when elections take place in some or the other parts of the country.

The minister also asserted that the constitutional rights of the minorities are absolutely safe and secure in the country and no one can weaken them.

The Narendra Modi-led government's "empowerment without appeasement" policy has created an atmosphere where minorities are also becoming part of the development process, he said.

To buttress his point, the minister said the National Commission for Minorities (NCM) received 2,638 complaints in 2013-14. During the next fiscal, the number of complaints came down to 1,995.

Most of these complaints were related to individual disputes.

"Still, we want to stop every single such incident which disturbs social fabric of the country," he said, reiterating that the NDA government has zero tolerance for such incident.

Naqvi said confidence can be created among the people only when communities feel they are equal partners of development of this country.

Naqvi said there are several questions relating to the minority communities which neither the Commissions nor the Minority Affairs Ministry can give answer to.

"There is a big question: why there is atmosphere of fear? There is government, our country is world's largest democratic system. There are at least 10-12 elections, in states or local bodies, where people decide on performance of the government.

"The accountability (of governments) is being decided in every six months now by states. Hence, political establishment has to remain alert and work with honesty," he said.

Stating there is always a lot of talk about about rights of minorities, Naqvi insisted that no government or party can harm constitutional rights of the communities which, he said, is a matter of pride.

The minister asked NCM and state minority commissions to monitor implementation of initiatives taken by the Centre for the welfare of minority communities even as they discharge their primary duties.

He also pitched for working for empowerment of minorities without appeasement.

"Harmony is password of development. It should not be let hacked. The forces which are trying to hurt harmony, those should be isolated. We need to strengthen the unity of the country," he said.

According to a statement issued by the Minister later, he also listed schemes the Union Ministry has come out with for the minorities.

Stating the Ministry has become 100 per cent digital in its transactions, he made mention of the mobile application it has launched for Haj pilgrims to apply online.

"We have received 50,000 applications on the mobile app within three days of its launch," he added.