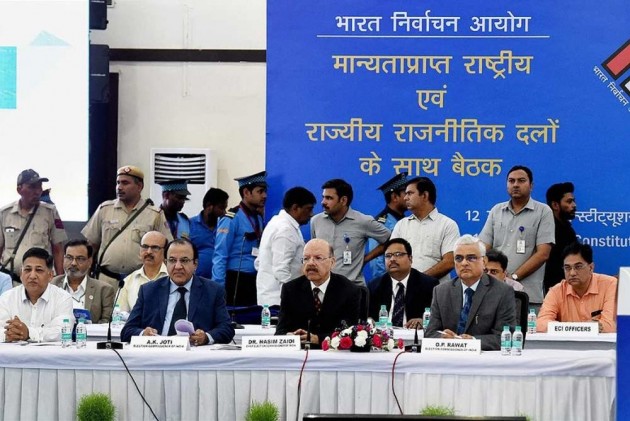 Print
A
A
A
increase text size
Outlook May 12, 2017 16:20 IST Election Commission Assures That It Will Bring In VVPATs Before 2019 Elections

Welcoming the demand of implementing Voter Verifiable Paper Audit Trail (VVPAT) with Electronic Voting Machines (EVMs), the Election Commission of India (ECI) on Friday said it has received the finances for buying the device and will have them activated by 2019 General Elections.

According to sources, the Election Commission said it would receive updated VVPATs in the time period stretching from August 2017 to September 2018.

The EC also asserted that the 2019 Lok Sabha elections would take place in the VVPAT format.

The Election Commission today convened an all-party meeting over the issue of EVM and other electoral reforms.

In its communication to the presidents of all the seven national and 48 state political parties, the Commission sent a status paper on EVMs and VVPAT.

The poll panel will try to assure parties that the EVMs cannot be hacked in any manner.

Last month, sixteen opposition parties had urged the Election Commission to revert to the paper ballot system saying that the alleged tampering has created trust deficit in the credibility of the EVMs.

However, the poll body has been maintaining that EVMs are tamper proof and cannot be manipulated.

The poll panel intends to use VVPAT units attached with EVMs in the coming elections for greater transparency and to keep voters' confidence in the electoral process.

The Union Cabinet had given its nod to sanctioned funds of nearly 3200 crore rupees to procure more than 16 lakh VVPATs as sought by the EC.

On Tuesday, the Aam Aadmi Party (AAP), during a special session of the Delhi assembly, conducted a live demonstration on how EVMs can be tampered with.

Reacting to the demonstration, the poll panel said the machine used to conduct live demonstration was a 'look-alike'' which was made to function in a 'tampered' manner.

Conducting a mock poll on an EVM machine, AAP leader Saurabh Bharadwaj demonstrated how despite giving two votes each to various parties; the final count showed that votes of some parties had been transferred to one party.

A day before the all-party meeting, the AAP on Thursday forwarded a new demand, calling for an all party committee to be formed under the monitoring of the EC to ascertain whether EVMS were hacked in the recently held elections or not. (ANI)