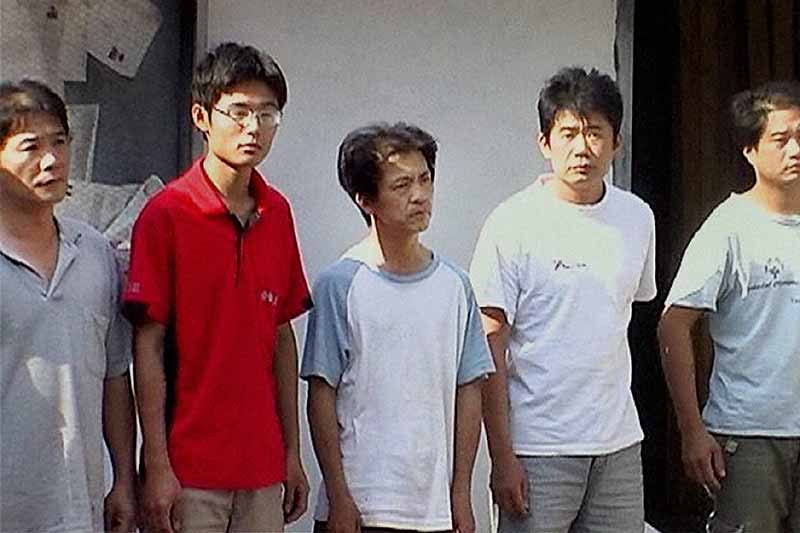 Chinese nationals who were arrested by the police for living without any legal documents near Joginder Nagar in Mandi distric, Himachal Pradesh.
PTI Photo

outlookindia.com
-0001-11-30T00:00:00+0553
In a major crackdown, eight Chinese nationals have been arrested on charges of overstaying from a fortified monastery in Mandi district and Rs 30 lakh, USD 3000 and SIM cards have been seized from them, police said today.

There was some confusion about their nationality with official sources in New Delhi saying the foreigners arrested were Taiwanese nationals and will be deported after interrogation.

Chinese embassy sources said those arrested have Chinese passports but "violated the tourist visa norms by indulging in craftsmenship" besides overstaying. They also said consular services will be provided if sought by those people.

Following inputs by central intelligence agencies, raids were carried out last night at the monastery in Chauntra village in Mandi, 150 kms from here. However, some Chinese fled the spot.

The raids came within days of Tibetan spiritual leader the Dalai Lama saying he had been passed reports from inside Tibet warning that Chinese agents had trained Tibetan women for a mission to poison him while posing as devotees seeking his blessings.

In Ahemdabad, Home Minister P Chidambarm said the motive behind the illegal stay of the foreigners was being ascertained and a report in this connection will be received by tomorrow.

In Shimla, DGP D S Manhas said police had received information that illegal activities may be going on in this resettlement area.

"Based upon these intelligence inputs, the searches were carried out yesterday and we were able to apprehend eight Chinese who were staying there illegally and had not reported to the police," he told reporters.

Manhas said the Chinese, holding expired tourist visas, were found working and further investigations were underway. Some of them were engaged as masons, carpenters, painters and electricians.

An FIR has been registered in Jogindernagar Police Station against the arrested persons under various sections of Essential Commodities Act, sections 379 (punishment for theft), 411 (dishonestly receiving stolen property) of IPC and various section of Excise and Income Tax Act.

Manhas said Income Tax authorities have been informed about the seizures.

"Definitely for the last six-eight months we have been getting some intelligence inputs and there were two cases reported where Chinese were found overstaying without any basic documentation and without any intimation," he said.

"So, we are taking all intelligence inputs seriously so that the security of the Dalai Lama is not compromised in any way," he said.

When contacted in Dharamsala, the Dalai Lama refrained from commenting on the arrests. "I don't know," he said at the airport before leaving for UK.

In Shimla, Chief Minister Prem Kumar Dhumal said before the raids some Chinese had left the spot.

"It is a matter of serious security concern," Dhumal said, seeking a joint probe by central and state investigating agencies.

"The motive of their stay would be known after investigations but I have been cautioning the Central government repeatedly about increased Chinese activities along the border and intrusions of air space in Kinnaur".

He also sought Centre's assistance to beef up the security of Dalai Lama and Karmapa Lama, another top Tibetan Buddhist leader.

The arrested Chinese nationals have been living in the house, protected by a 15-foot high wall, for quite some time, police said.

The police was investigating as to how these Chinese nationals managed to come together in a remote village like Chauntra.

SP, Mandi, A Dhullar said the Chinese were working as carpenters and painters in the under-construction house and working for a contractor from Sikkim.

"They had taken employment when they had only tourist visa," he said.

Besides the eight, two locals were also arrested, police said, adding 35,000 Chinese Yuan was found on the arrested Chinese nationals.

The monastery, fortified by a 15-foot high wall, was being constructed by Sikkim-based Gankar Rimpoche, police said.