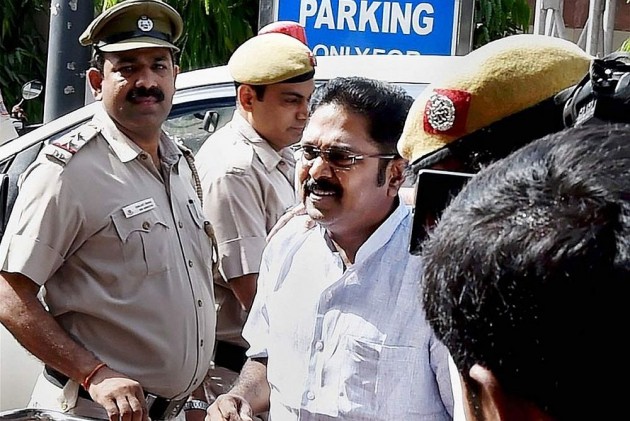 A Delhi Police team, probing the Election Commission bribery case, will travel to Tamil Nadu with arrested AIADMK (Amma) leader TTV Dhinakaran and his aide to gather details about "illegal channels" used for transferring money from Chennai to Delhi.

Police will also be confronting Dhinakaran and Mallikarjuna along with the arrested middleman, Sukesh Chandrasekar, to get the details of the money trail and the phone conversations between them.

In Chennai, police will try to recover the mobile phones through which Dhinakaran used to communicate with Chandrasekar.

Dhinakaran was arrested last night following four days of questioning for allegedly attempting to bribe an unidentified Election Commission official to get the undivided AIADMK's 'two leaves' election symbol for his faction.

Police had earlier said Chandrasekar had struck a deal for Rs 50 crore to help the AIADMK faction keep the 'two leaves' symbol. He had Rs 1.30 crore in cash in his possession when he was arrested from a five-star hotel in Delhi on April 16.

Dhinakaran was arrested for arranging the amount from undisclosed sources and getting it transferred from Chennai to Delhi through illegal channels, said Deputy Commissioner of Police (Crime) Madhur Verma.

Mallikarjuna was arrested for helping Dhinakaran transfer this money from Chennai to Delhi, he said.

The police are verifying whether Chandrasekar had approached any Election Commission official for getting a favourable verdict for Dhinakaran's faction.

The AIADMK (Amma) leader had come under the scanner of the police following Chandrasekar's arrest.

Dhinakaran, who was appointed deputy general secretary by AIADMK chief V K Sasikala, has been isolated in his party amid moves to merge rival factions led by Tamil Nadu Chief Minister E K Palaniswami and his predecessor O Panneerselvam.

A powerful section of the ruling AIADMK (Amma) recently revolted against the Sasikala-Dhinakaran leadership. The development came after Panneerselvam, who is leading the rival faction, demanded the ouster of Sasikala and Dhinakaran as a condition for merger talks.