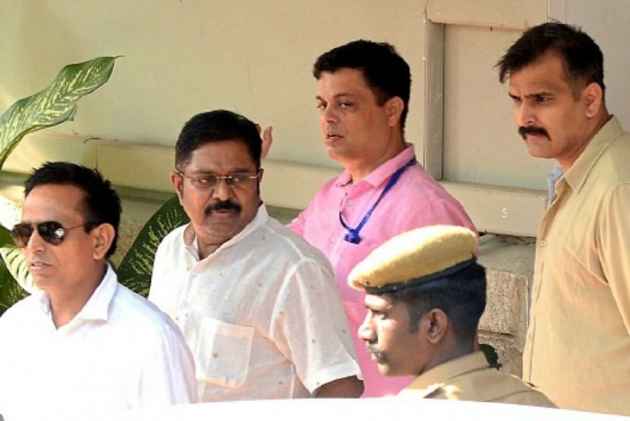 T T V Dhinakaran was earlier arrested by the Delhi Police on April 25, after police investigation revelaed his alleged involvement in the Election Commission bribery case.

His close aide Mallikarjuna, who was also arrested in the case, was also granted the relief by Special Judge Poonam Chaudhary.

The court granted the relief to the two, saying they were no longer required for custodial interrogation. They have been asked to furnish a personal bond of Rs five lakh each and two sureties of the like amount.

The court directed them not to try to influence the witnesses or tamper with evidence.

It also observed that the public servants, who were to be allegedly lured, have not been identified.

The court directed the two not to leave the country without its prior permission and asked them to surrender their passports. They were also asked to join the investigation as and when required by the probe agency.

Dhinakaran, who was arrested by Delhi Police Crime Branch on April 25, had sought bail on the ground that there was no reason to keep him in custody and no public servant was made an accused in the case, though he was booked on graft charges.

His plea was opposed by the police which had said he had conspired with others to undermine the sanctity of the electoral process through corrupt means and practices.

Mallikarjuna, who was also arrested on April 25, sought bail on the ground that no recovery was made at his instance and he had joined the investigation even though no summons were issued to him by the police. His bail application was also opposed by the police.

The court had on May 22 dismissed the bail plea of Chandrashekar saying it was not appropriate to grant him bail at this stage as it was a serious crime and he could tamper with the evidence.

Earlier, the police had sought the consent of Dhinakaran and Chandrashekar for taking voice samples but both of them had refused.

Dhinakaran was arrested here on the night of April 25 after four days of questioning for allegedly attempting to bribe unidentified Election Commission (EC) officials to get the undivided AIADMK's 'two leaves' election symbol.

His faction had hoped to obtain the symbol for the bypoll to the R K Nagar Assembly seat in Tamil Nadu, which was later cancelled by the EC after the alleged irregularities were reported in the media.

The bypoll was necessitated following the death of Tamil Nadu Chief Minister J Jayalalithaa who was elected from the constituency.

The EC had frozen the AIADMK's symbol after two factions of the party -- one led by Dhinakaran's aunt Sasikala and the other by former chief minister O Panneerselvam -- staked claim to it.

Dhinakaran has been accused of allegedly arranging the money from undisclosed sources and getting it transferred from Chennai to Delhi through illegal channels.

Mallikarjuna was arrested for allegedly facilitating a Rs 50-crore deal between Dhinakaran and Chandrashekar.