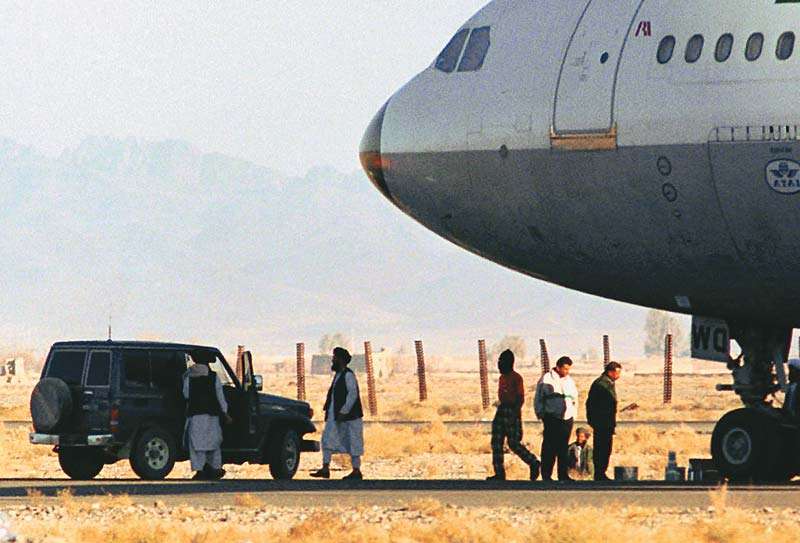 Print
A
A
A
increase text size
Outlook July 03, 2015 19:58 IST Dulat's Claim of 'Goof Up' by Vajpayee Govt in Kandahar Fuels Controversy

Former RAW chief A S Dulat's claim of a "goof up" in Kandahar hijack response by the Vajpayee government in 1999 triggered a controversy today with BJP outrightly rejecting it while Congress alleged that its "soft" approach laid the "foundation of terrorism".

In forceful assertions by its leaders, BJP said there was no other option left then but to release the three dreaded terrorists to save the lives of people on board the Indian Airlines plane that was hijacked and taken to Kandahar.

Dulat, the former head of Research and Analysis Wing (RAW), had said that the Crisis Management Group (CMG) "goofed up" the entire case by not immobilising the plane when it had landed in Amritsar and that the then Jammu and Kashmir Chief Minister Farooq Abdullah felt the decision by Union Government to release terrorists was a "mistake".

The BJP outrightly rejected Dulat's claims about the alleged "goof up" of the IC-814 hijacking incident. It also rebutted claims of the ruling party compromising with terrorists and terrorism and accused Congress of allowing people like Warren Anderson, responsible for the death of thousands in Bhopal gas tragedy, escape scotfree.

"Foundation of terrorism not only in India but the entire world (was laid) when three terrorists were let loose by a soft government led by the BJP", Congress spokesman Tom Vadakkan said, latching on to Dulat's claims.

Accusing the BJP of practising "false nationalism" and "fake patriotism", he said it was a fact that the "base" of terrorism not only in India but the world was laid with the release of the three ultras.

"Congress demands that Prime Minister Narendra Modi and BJP apologise unconditionally to the nation for having aided, abetted and facoured anti-India elements, terrorists and criminals," he said.

Rejecting Congress claims, BJP Spokesperson M J Akbar said Congress has a "very convenient memory" on Kandahar while noting that the decision to save hijacked Indians was taken after consultations with everyone.

"I challenge it to answer one question: Should those around 200 Indians have been allowed to die? Please ask them this question and please ask them to respond," Akbar said.

Yashwant Sinha, a senior BJP leader and a Union Minister in the Vajpayee Cabinet during the Kandahar incident, claimed that there was no other option before the government but save the lives of passengers.

"Anyone who is criticising that decision should come out openly and say we should have sacrificed the lives of passengers held and not released the terrorists. There was absolutely no other option, except to brittle down their demand as much as we could through negotiations and then the very minimum had to be accepted," he said.

Three hardcore terrorists were released by the government in exchange for the lives of the 155 passengers and the crew members members to end the 8-day-old hijack crisis.

Former Union minister Sinha denied any "failure" during the Kandahar episode and said the issue was negotiations with those who had hijacked the plane and arrive at a settlement.

Sinha was also not in favour of revealing secrets as Dulat has, saying, "All of us are repositories to many secrets. Secrets go to the grave with us. We should not talk about them. If the oath of secrecy is violated so freely then it will become too difficult for the government to function."

BJP National Secretary Shrikant Sharma accused Congress of raking up "dead issues" for its political survival and charged the opposition party with allowing Warren Andersen, who was responsible for thousands of deaths in the Bhopal Gas tragedy, to escape scot-free.

"Congress is devoid of issues and is trying to borrow them and rake up dead issues," he said.

On the issue of Syed Salahuddin seeking help for his son's medical admission, BJP spokesperson Akbar sought to put the blame on the Jammu and Kashmir government led by Farooq, saying the decision may have been taken by it and the question should be posed to him. "We want to say very categorically, very unequivocally, without the least hesitation, that the government of Prime Minister Atal Bihari Vajpayee had nothing to do with that decision," he said.

Congress leader Vadakkan said his party stood vindicated by Dulat's revelations, which are severe indictment of BJP Government and establishes that self-styled 'nationalism' of BJP is guided by extending help to terrorists and criminals on 'humanitarian grounds'.

Another Congress spokesperson Ajoy Kumar said the interview by former chief of Research and Analysis Wing (RAW) has brought "certain disturbing facts" in the open including that the Vajpayee government was in "active communication" with the Hizbul Mujahideen chief Syed Salahuddin and even admitted his son to a medical course.

"It shows the pseudo-nationalism of the BJP... Whenever in power, it has compromised with terrorists and terrorism," Kumar alleged, adding that Saluhaddin and his organisation was responsible for the killings of thousands in the country.

Sallahuddin had no contact with any government, non-governmental or security agency, Hashmi added.

Moderate Hurriyat Conference also outrightly rejected the statement of Dulat that its Chairman Mirwaiz Umar Farooq could have been made to join the mainstream politics. "We outrightly reject Dulat's revelation...," the separatist amalgam said in a statement here.

The Communist Party of India asked veteran BJP leader and then Union Home Minister L K Advani to "throw light" on the circumstances during the period the Kandahar plane hijack episode occurred.

"The only person who can throw some light on issues like hijack of Air India plane is L K Advani. He should reply. At that time, there was lot of criticism against then External Affairs Minister Jaswant Singh. So, Advani should throw light on circumstances then," CPI national secretary D Raja said.