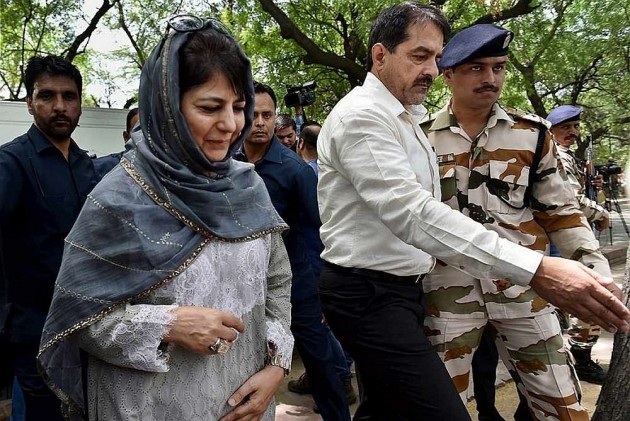 Jammu and Kashmir Chief Minister Mehbooba Mufti today asked the national media to desist from portraying all Kashmiri youth as stone-pelters and not to show discussions that develop hatred against the people of the state.

She said Kashmir has seen far more worse days since 1947 and expressed hope that peace will return to the troubled valley where protests have been going on intermittently over the past nearly two months.

"All of us are concerned about the situation in Jammu and Kashmir. But we should know that this has not happened for the first time.Since 1947, there have been many occasions when J-K has gone through bad times.Today we are again at crossroads," Mehbooba told reporters at a brief interaction at the opening of the Civil Secretariat here.

The Civil secretariat functions here for six months of summer and in Jammu for six months in winter as part of a more than century-old practice called Darbar Move started by the then Maharaja.

Referring to the Plebiscite movement launched in Kashmir in the 1950s, Mehbooba said it carried on for 22 years but the leadership understood that this issue cannot be resolved through violence.

"The Indira-Sheikh accord happened, then the situation turned grim again since 1990. Sometimes militancy increased and sometimes it decreased," she said expressing hope that things will improve again.

The chief minister said all youth from the valley are not stone-pelters.

"I request the national media, the electronic media, not to show such discussion on television that develop hatred against the people of J-K throughout the country.There are some who pelt stones, but not all the youth from Kashmir pelt stones," she said.

The chief minister said Jammu and Kashmir is the crown of India and people of the state have a right over every inch of the nation.

"It (J-K) is the soul of this country. When there is J-K, there is India. The people of J-K not only have right over J-K, but on each part of the country and they should assert it," she said.

On the ongoing protests by students in the valley, Mehbooba said they are angry and disillusioned.

"Today, our children and our youth, whatever way they are on, are angry and disillusioned. Some are being provoked. I think we all should work together to resolve this situation," she said.

Mehbooba noted that the youth of the state are excelling in national level examinations and sports arena.

"They have so much potential that they can prove themselves anywhere in the country. The situation today is serious, (we are) concerned, but I do not think it is something which cannot be resolved.I have seen enough in my life," she added.

Earlier, Mehbooba took a ceremonial salute at the opening of the Civil Secretariat and was given a guard of honour by the contingent of Jammu and Kashmir Police.