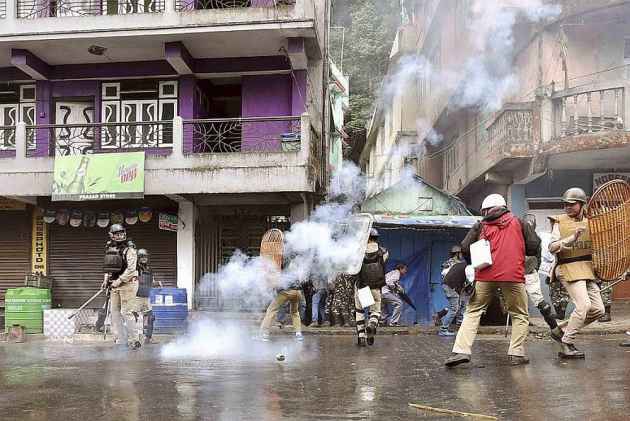 As Darjeeling remained on the boil over a separate statehood agitation, Union Home Minister Rajnath Singh today appealed to protesters not to resort to violence and, instead, hold dialogue to resolve any issue.

He said resorting to violence would never help them in finding a solution and asked the people living there to remain calm and peaceful.

"All concerned parties and stakeholders should resolve their differences and misunderstandings through dialogue in amicable environment," Singh said.

In a democracy like India resorting to violence would never help in finding a solution, he said, emphasising that "every issue can be resolved through mutual dialogue".

"I appeal to the people living in Darjeeling and nearby areas to remain calm and peaceful. Nobody should resort to violence," the home minister said in a series of tweets.

Singh also spoke to West Bengal Chief Minister Mamata Banerjee today and discussed with her the situation prevailing there.

"She (Banerjee) has apprised me of the situation prevailing in Darjeeling," he said.

Singh had yesterday also spoken to Banerjee and asked her to take all possible steps so that peace is restored in the picturesque hill station where people are protesting against "imposition" of Bengali in schools by making the language mandatory.

The Gorkha Janmukti Morcha (GJM), which is in power in the semi-autonomous Gorkhaland Territorial Administration, is spearheading the agitation there demanding a separate state -- Gorkhaland.

Darjeeling remained on the edge today as thousands of protesters assembled at the central Chowkbazar carrying the body of a GJM activist, who was killed during clashes with police, and raised slogans demanding a separate state of Gorkhaland.

Security personnel in large numbers were deployed in the hill district of West Bengal after widespread clashes between Gorkha Janmukti Morcha (GJM) activists and the police were witnessed yesterday.

The GJM has claimed that two of their supporters were shot dead by police in Singmari yesterday. The police rejected the allegations of firing by its personnel, and said one person was killed during the clashes.

This was the first death since violent protests returned to Darjeeling on June 8, after a gap of a few years.