Donald Trump has said he has been “running a war” with the media and warned them of consequences for falsely reporting that less number of people attended his inauguration. 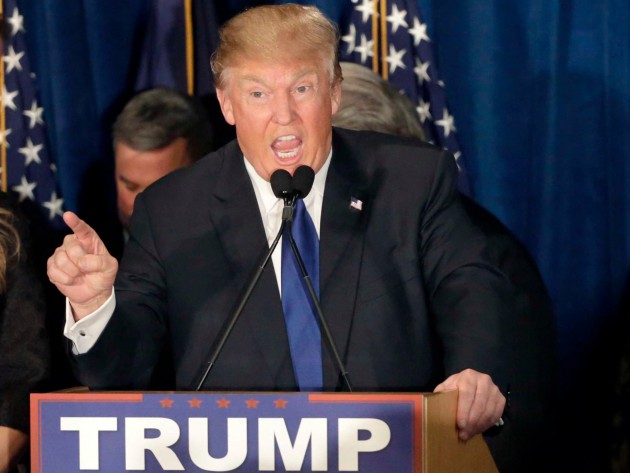 Print
A
A
A
increase text size
Outlook January 22, 2017 13:33 IST Donald Trump Describes Journalists As The Most Dishonest Human Beings On Earth

Describing journalists as the most dishonest human beings on Earth, United States President Donald Trump has said he has been “running a war” with the media and warned them of consequences for falsely reporting that less number of people attended his inauguration.

“We had a massive field of people. You saw them. Packed. I get up this morning, I turn on one of the networks, and they show an empty field,” Mr. Trump said.

“I say, wait a minute, I made a speech. I looked out, it looked like a million, million and a half people. They showed a field where there were practically nobody standing there. They [media] said, Donald Trump did not draw well. I said, it was almost raining, the rain should have scared them away, but God looked down and he said, ‘we’re not going to let it rain on your speech,’” he said.

“Then I walked off and it poured right after I left. It poured. But, we have something that’s amazing because, it looked like a million-and-a-half people. Whatever it was, it was. But it went all the way back to the Washington Monument. And I turn on —and by mistake I get this network, and it showed an empty field. And it said we drew 2,50,000 people,” he said.

“Now, that’s not bad, but it’s a lie. We had 2,50,000 people literally around in the little bowl that we constructed. That was 2,50,000 people. The rest of the 20-block area, all the way back to the Washington Monument, was packed. So we caught them, and we caught them in a beauty. I think they’re going to pay a big price,” Mr. Trump warned, speaking at the Central Intelligence Agency (CIA) headquarters. He told the top spy agency that this is the reason for him visiting the CIA headquarters as the media has portrayed that he has differences with the intelligence community.

“The reason you’re my first stop is that, as you know, I have a running war with the media. They are the most dishonest human beings on Earth,” Mr. Trump said amidst applause and laughter from the CIA officials attending his maiden address to them.

“They sort of made it sound like I had a feud with the intelligence community. And I just want to let you know, the reason you’re the number-one stop is exactly the opposite. They understand that, too,” he said.

Then the President listed out another incident.

“So a reporter wrote that Trump took down the bust of Martin Luther King.

“It was right there. But there was a cameraman that was in front of it. So a reporter writes a story about I took down. I would never do that because I have great respect for Martin Luther King. But this is how dishonest the media is,” Mr. Trump alleged.

“I only like to say that because I love honesty. I like honest reporting. I will tell you, final time — when you let in your thousands of other people that have been trying to come in — because I am coming back — we’re going to have to get you a larger room,” Mr. Trump said indicating that he would have a bigger room for the White House press corps.

Meanwhile, in an unusual sharply worded remark, that took the White House press corps by surprise, new White House Press Secretary Sean Spicer blasted the media for what he considered “inaccurate and unfair” press coverage over the past 48 hours.

Prominent among these included tweets about the Martin Luther King bust in the Oval Office, and the crowd size coverage during presidential inauguration on Friday.

“The President is committed to unifying the country and that was the focus of his inaugural address. This kind of dishonesty in the media, the challenge of bringing about our nation together is making it more difficult,” Mr. Spicer said.

“There’s been a lot of talk in the media about the responsibility to hold Donald Trump accountable. And I am here to tell you that it goes two ways. We are going to hold the press accountable as well,” said the new White House Press Secretary.

Mr. Spicer did not take any question but said he would hold his first news conference on Monday.

In an open display of anger and frustration against the media Mr. Spicer alleged photographs of the inaugural proceedings were intentionally framed in a way in one particular tweet to minimize the enormous support that it gathered on the National Mall.

“This was the first time in our nation’s history that floor coverings had been used to protect the grass in the mall. That had the effect of highlighting any area where people were not standing while in years past the grass eliminated this visual,” he charged.

Mr. Spicer said this was also the first time that fencing and magnetometers went as far back on the mall preventing hundreds of thousands of people from being able to access the mall as quickly as they had in inaugurations past.

“Inaccurate numbers involving crowd size were also tweeted. No one had numbers because the National Park Service which controls the National Mall does not put any out,” he asserted.

Mr. Spicer has said this applies to any attempts to try to count the number of protesters on Saturday in the same fashion.

“We do know a few things so let’s go through the facts. We know that from the platform where the President was sworn in to 4th Street holds about 2,50,000 people. From 4th street to the media tent is about another 2,20,000. And from media tent to the Washington Monument another 2,50,000 people,” he said.

“All of this space was full when the President took the oath of office. We know that 4,20,000 people used the DC metro public transit yesterday which actually compares to 3,17,000 that used it for President Obama’s last inaugural,” he said.

Mr. Spicer said this was the largest audience to ever witness an inauguration. “Period. Both in person and around the globe,” he added.