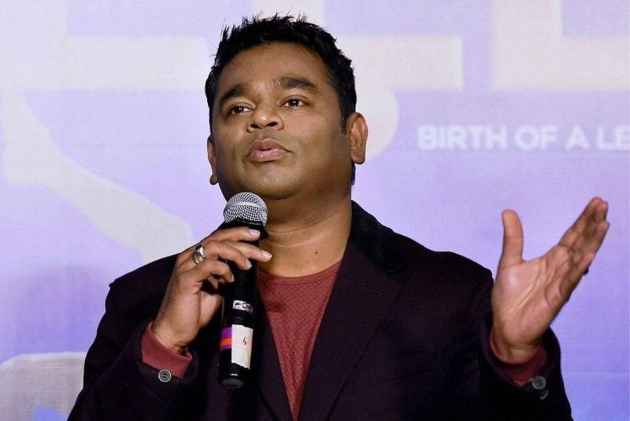 When scores of A.R.Rahman fans walked out of his London concert because he sang not just in Hindi but also Tamil, they seemed to be motivated by a concept that many Indians identify with -- "paisa wasool" or getting bang for the buck.

The controversy that kicked up also revealed how Indians remain divided by language, region and culture even when they are expatriates in a foreign land where the differences should get blurred.

The concert "Netru, Indru, Nalai" ("Yesterday, Today, Tomorrow") at The SSE Arena in London's Wembley Stadium on July 8 was a celebration of the Oscar-winning musician's 25 years of journey that began with "Roja" in 1992.

His track list, which was later put up on social media to dispel complaints about language bias, had an almost equal mix of Hindi and Tamil songs.

According to concert organisers -- HueBox Entertainment and Hamsini Entertainment -- there were 16 tracks in Hindi, 12 in Tamil and one medley with a mix of Tamil and Hindi.

Delhi-based sociologist Sanjay Srivastava says the anger -- despite Rahman performing hits like "Tu Hi Re" and "Jai Ho" -- reflects the "language chauvinism" which favours a certain kind of Indian identity over others.

"The assumption is always there that the North Indian identity is the natural Indian identity and it is part of the problem in terms of linguistic nationalism in this country," Srivastava told PTI.

Many concertgoers, comprising mostly Indians and other South Asians, looking out for Rahman's Bollywood hits, were offended and took to Twitter to demand a refund of their 35-50 pound tickets.

"That was my first ever Tamil concert guys. Albeit completely unintentional #ARRahman #SSEArena #Fail #Refund?," a concertgoer wrote on Twitter.

"#ARRahman concert: Never seen so much #disappointment & #masswalkouts. Approx one per cent of songs in Hindi. #ssearena filled on #falseadvertising," tweeted another.

Srivastava believes this kind of response has partly to do with the language chauvinism that has existed in India for a long time where Hindi is seen as the Indian language.

"It is also true that the Indian diaspora population sticks to their own ethnic, linguistic divisions," Srivastava said.

In his view, the concert's title was in Tamil so it was wrong to say that concertgoers were duped by the organisers.

"He is from the Tamil background and yet no one would have complained if he had mostly sung Hindi songs. The impatience of the audience is linked to the broader ideas of what is the Indian identity. He had a career before and apart from Bollywood. You should expect that he would play Tamil songs," he said.

The world is getting irritable, added Mumbai-based psychologist Harish Shetty.

"We are regressing. Economic empowerment doesn't always equal social empowerment so the mind becomes regressive and we pick up issues that are not important."

Artistes, too, feel that bracketing a musician like Rahman into a particular language or genre is unfair to his versatility.

"Music is the universe's first language. It should be a uniting force. I pity those with narrow linguistic or parochial biases," musician Vishal Dadlani told PTI.

Singer Shilpa Rao, who has worked with Rahman, said people prefer familiarity over surprise in concerts.

"One should come to a concert and be surprised... Audiences today don't have the time to think whether they like the music or not. They are not coming to get enthralled but for the familiarity," Rao told PTI.

Sona Mohapatra, also a singer, said people should look beyond their cultural identities to appreciate art.

"Music has no language or boundaries and if this is the actual reason people walked out of a concert then it reflects sadly on their tastes.

"The arts, artistry, authenticity, aesthetics and an understanding and appreciation of them only enriches life, no matter what the cultural roots may be."

Kavita Seth, whose concerts see repeated requests for songs like "Iktaara" to the exclusion of her other work, said it was wrong to blame an artiste like Rahman for singing Tamil songs as his identity is not confined to one particular language.

"You should leave it to the artiste, he has composed the Hindi ones and the Tamil ones. Maybe that was a set he prepared, so let him sing what he wants."

"When Rahman sir wins 2 Oscars and creates history, he is 'An Indian', but 7-8 Tamil gaane kya gaa liye aap naraaz hote ho (all this furore over playing 7-8 Tamil songs?). What yaar?"