Do What Vajpayee Did to Win Hearts in Kashmir: Mehbooba to Modi 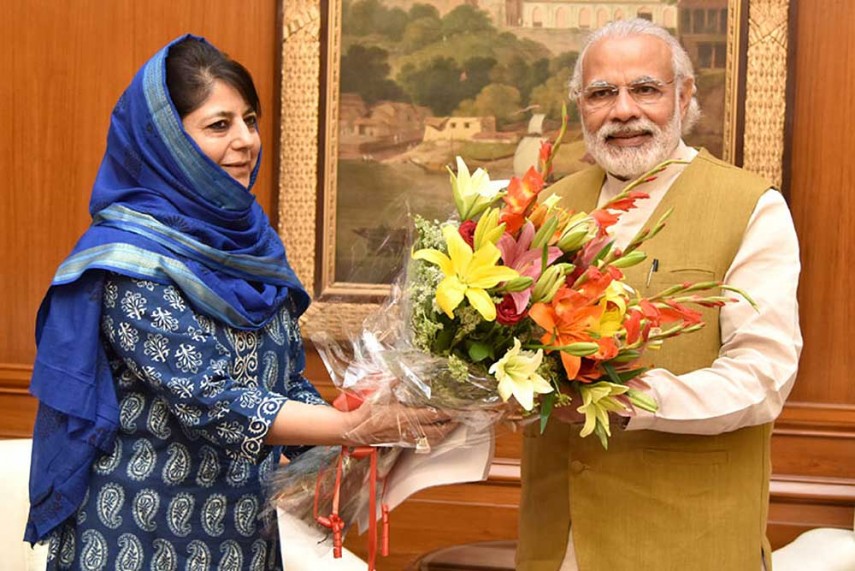 Print
A
A
A
increase text size
Outlook August 08, 2016 19:15 IST Do What Vajpayee Did to Win Hearts in Kashmir: Mehbooba to Modi

Facing a month-long turbulence and violence in the state, Jammu and Kashmir Chief Minister Mehbooba Mufti today urged Prime Minister Narendra Modi to open a dialogue process with the people of the state.

Talking to reporters after a two-hour meeting with Home Minister Rajnath Singh, which was attended by Defence Minister Manohar Parrikar, Mehbooba also hinted at resuming a dialogue with Pakistan on Kashmir issue saying the state could act as a "bridge" between the two nations.

"There is a need to apply balm to the wounds of Kashmiri people," she said.

Mehbooba, who has been facing difficulties in restoring normalcy in the Valley following the killing of Hizbul Mujahideen militant Burhan Wani on July 8, said only the process of dialogue with the people of Kashmir can help improve the situation.

The Chief Minister said during the one month of unrest, which started after the killing of Wani, 55 people lost their lives and referred the deceased as "our own boys".

"People will keep dying if we don't take initiative to bring normalcy. We want peace. There is an opportunity for dialogue and we should avail it," she said.

"We have seen agitations in the past like in 2008 (Amarnath land row) and 2010 (over fake encounters by army). Our children have been killed. Our families have suffered. I don't wish to see any more killing.

"Our Prime Minister has a huge mandate in the present Lok Sabha and he should seize the opportunity created by the unrest to win the hearts of the people and solve their problems, the way former Prime Minister Atal Bihari Vajpayee did," she said.

"I am hopeful that the Prime Minister will take this as an opportunity to initiate dialogue with people to address their problems. There is a need to take the same initiative of winning hearts of people, which was taken during Vajpayee ji’s tenure," she said after the meeting which was also attended by National Security Advisor A K Doval and other senior officials of Home, Defence and Finance Ministries.

The meeting took place on a day when month-long curfew in Kashmir echoed in Parliament with Leader of Opposition in Rajya Sabha Ghulam Nabi Azad raising the matter during Zero Hour and demanding a statement from the Prime Minister about the steps being taken by the government for restoring normalcy.

"In such circumstances, we want to awaken the government ... We feel the government and the Prime Minister are watching the situation deteriorate like a silent spectator," he said, adding he wanted to know why Modi has not spoken on the grave situation in Kashmir so far.

The Chief Minister stressed on the need for taking "bold and tangible" initiatives to reach out to the people in Jammu and Kashmir.

Mehbooba called for reviving the confidence building and peace process in the state and the region through a productive dialogue process with all shades of the political opinion, as was done by the then NDA government headed by Atal Bihari Vajpayee in 2003, a state government statement said.

She said while the problems confronting the state could be tackled through short-term economic and developmental initiatives, "there has to be a political solution to the problem of the state, which could be reached out by involving all the stakeholders in a constructive and result-oriented dialogue process."

Mehbooba said the state has been witnessing repeated cycles of deadly violence, and there has to be an end to this vicious cycle of violence, which can be made possible only through a productive dialogue and reconciliation process.

"We saw similar volatile situations in 2008 and 2010, resulting in loss of precious human lives, destruction of public properties and enormous economic drop-down as has happened this time around," she said and added that there has been mounting cynicism in Kashmir over a period of time as "every confidence building process initiated in the past was never followed up with sincerity of purpose".

She said whether it is the Working Group recommendations, reports of All Party Delegations or recommendations of Interlocutors, there has been, unfortunately, no follow-up on the same resulting in "cynicism and alienation" in Kashmir, especially among the youth.

"I hope the current situation, unlike the past, could be used as an opportunity to reach out to the people in Jammu and Kashmir through tangible confidence building initiatives and provide the much-needed healing touch to them to tide over the trust-deficit," she said.

Mehbooba said," There is a need to heal the wounds of the people in Kashmir who have seen immense tragedies because of violence and bloodshed."