Do I Look Old to You? Priyanka Slams Modi 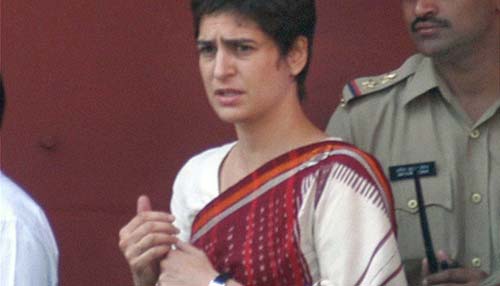 outlookindia.com
-0001-11-30T00:00:00+0553
Gujarat Chief Minister Narendra Modi's remarks on "Congress being an old party" have drawn sharp reactions from state Congress leaders, who alleged that Chief Minister has lost control over his language because of frustration.

Campaigning for her brother and Congress MP Rahul Gandhi in his constituency of Amethi, Priyanka Gandhi asked: "Kya mein budhi dikhti hoon? (Do I look old to you)," she asked people of Khalidpur village.

"Does Sonia Gandhi (Congress president and her mother), Rahul Gandhi or I look old to you?" she asked, addressing voters.

Uma Bharati, an erstwhile member of BJP, jumped in the fray, and said that Priyanka Gandhi Vadra's remarks were symptomatic of the problem of dynastic politics in the Congress. "Once upon a time we had the delusion about Indira is Indira" and now when the Congress party's age is brought up, is it not strange that Priyanka should bring up her family's age, she asked.

While campaigning for the Bharatiya Janata Party (BJP) in Uttar Pradesh Chief Minister Narendra Modi had said that Congress is "a 125-year old-budhia party" (old party) and it cannot work for development of the country.

"People of Gujarat are known for their culture. In our culture, even an enemy is also treated with respect. But unfortunately, the Chief Minister has lost control over his language," said Opposition leader Shaktisinh Gohil.

He said that frustration is gripping BJP and its leaders like Narendra Modi, Varun Gandhi and others, who are losing control and discretion on their tongue.

"Before making such ridiculous remarks in order "to gain cheap publicity" the Chief Minister should look at LK Advani, BJP's PM in waiting, who is 81," Gohil said.

He said that such derogatory and disparaging remarks are expected of "uncultured persons like Modi, who neither has his own culture nor represents any".

"It seems that since Modi cannot attack Advani directly on his age, he is attacking him through Congress because Modi has nurtured his prime ministerial ambitions for long and Advani is an impediment on his way," said Gohil.

He said the Congress party is represented by young brigade including persons like Rahul Gandhi, Sachin Pilot, Jitin Prasad, Milind Deora, Jyotiradtya Scindia and others while BJP has Advani who has already crossed 80.