Do Everything Possible to Get Missing JNU Student: HC to Cops 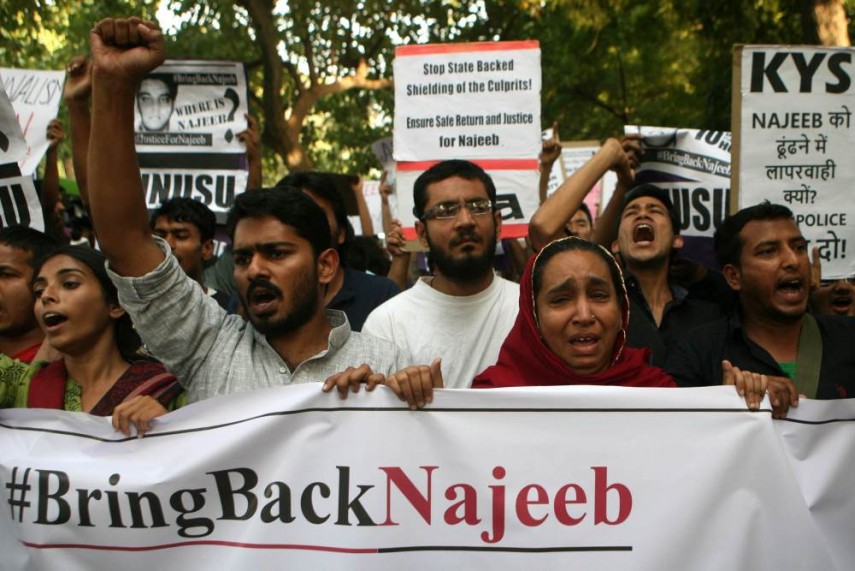 Print
A
A
A
increase text size
Outlook December 22, 2016 19:18 IST Do Everything Possible to Get Missing JNU Student: HC to Cops

"Do everything possible to get the missing JNU student", Delhi High Court today told the police and directed that Najeeb Ahmed's roommate and the nine suspects in the case be subjected to lie-detector test.

A bench of Justice G S Sistani and Justice Jayant Nath, however, made it clear to the Delhi Police that they will only subject the suspects to the test after getting their consent.

"Why should anybody, who is related to the case, shy away from helping in the investigation? We do not want to give concession to anyone, whether it is the family members, friends or Najeeb's roommate. Lie-detector test should take place, as every body will have to work on this case.

"The police will conduct the test expeditiously and as soon as possible and file their status report before January 23 next year. We further expect that the police would do everything possible to get the boy and even search the suspects' native places using sniffer dogs," the court said.

"We want that something substantial comes out of the effort we all are involved in, before the next date of hearing," it said.

Najeeb has been missing since October 15 after a scuffle at his hostel allegedly with ABVP students the previous night.

A reward of Rs 10 lakh has been announced by the police on any information about Najeeb, who has remained untraced even after 69 days of the incident.

The court's direction came after it was informed by senior standing counsel Rahul Mehra that Najeeb's roommate Mohd Qasim had initially given his consent for the lie- detector test, but did not turn up yesterday.

To this, senior advocate Colin Gonsalves, submitted that Qasim will undergo the lie-detector test only after the nine suspects undergo the process.

Gonsalves also submitted that the police have searched the houses of Najeeb's relatives and distant relatives but did not even bother to look in the rooms of the suspect, who all have left for their homes after the incident.

Mehra opposed the contention and submitted that they would have done so, if it would have been pointed out earlier. He said the agency had issued notice to those nine and they are on their way to Delhi.

"They have even given their consent to undergo the test. Once they reach Delhi, their rooms will be searched and even they will be interrogated," Mehra said.

On this, the court remarked that the investigation should be done uniformly, whether one is a suspect or not.

"Roommate and these nine boys should have been interrogated at the initial stage only. They should have been subjected to lie-detector test," the bench said and asked the police whether they have called the parents and family members of Najeeb for the test.

"Did you (investigating officer of the case) interrogate Najeeb's brother and his family members in this regard? You should have done this also. As far as we are concerned, we thought the nine suspects were staying at the hostel in the JNU campus. But if you would have told this to us, we would have definitely asked the police to search their rooms in Delhi as well out of Delhi," the court said.

It further asked the police to keep an eye on the rooms of those suspect and even take sniffer dogs to their rooms to see if some clue can be picked up from there.

"If they have not done anything, why will they shy away from allowing a search of their hostel rooms or their houses? What is there to hide? They will have to cooperate with the ongoing investigation so that something conclusive comes out."

The court was hearing a habeus corpus plea by Najeeb's mother, Fatima Nafees, seeking to trace out her son who has been missing since the intervening night of October 14-15.

Taking note of this, the court on December 14 had asked the police to scan the entire campus, including hostels, classrooms and rooftops, using sniffer dogs.

Following the court direction, Mehra today told the court that they have searched the entire JNU campus for two days, but have not been able to find the boy.

The senior standing counsel further submitted that they will go for lie-detector test of the persons concerned.

While deliberating the steps carried out to search the missing student, he informed the court that over 600 police personnel assisted by two squads of sniffer dogs and four squads of mounted police concluded their search of the sprawling JNU campus but could not find any clue.

Mehra further said the exercise was undertaken by 12 ACPs, 30 inspectors and 60 sub inspectors along with hundreds of constables under monitoring of two DCP rank officers to search the 1090 acre campus.

Continue FREE with Ads Pay Rs. 1 to Read Without Ads
READ MORE IN:
Society
Next Story : Modi's Comparison Of the Opposition With Pakistan Shows His Frustration, Says Mayawati
Download the Outlook ​Magazines App. Six magazines, wherever you go! Play Store and App Store