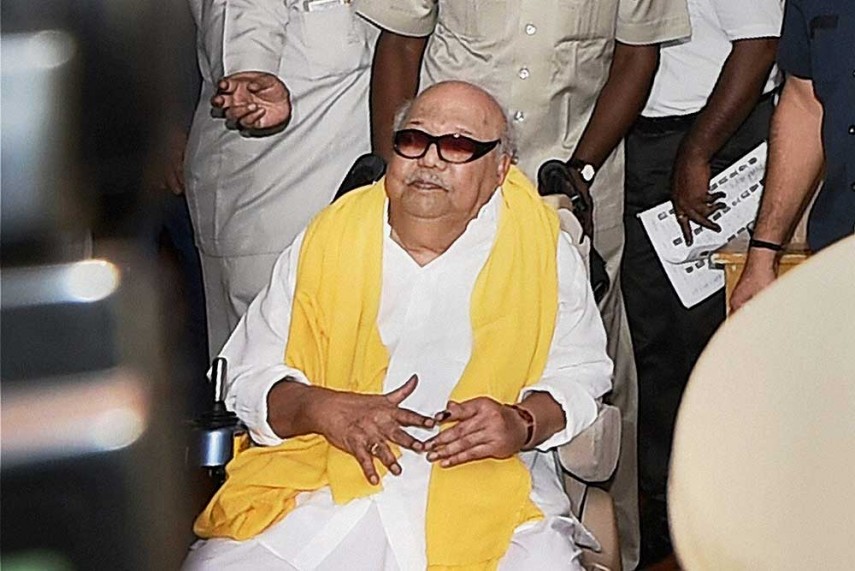 DMK patriarch M Karunanidhi was today discharged from a private hospital here after a week-long treatment for breathing difficulty caused by throat and lung infections, with doctors advising him complete rest.

The course of antibiotics for the 93-year-old DMK chief has been completed and he has "recovered well" from breathing difficulty due to throat and lung infections, Executive Director of Kauvery Hospital Dr S Aravindan said.

Karunanidhi was hospitalised on the night of December 15. The next day, he underwent tracheostomy to optimise breathing and the hospital had declared him as being stable.

Dr Aravindan, in a statement today, said, "Doctors have advised him complete rest and restriction of visitors."

He said Karunanidhi needs tracheostomy tube for a few more weeks and added that medical and nursing care would continue to be provided at his home by the hospital.

The DMK patriarch was given a warm welcome by senior party leaders and cadres when he arrived at his Gopalapuram residence.

Earlier soon after his hospitalisation, there was a marked improvement in his condition and he even watched Rajinikanth blockbuster "Batcha" on his laptop.

Karunanidhi was in the same hospital between December 1 and 7 for drug allergy treatment.

On October 25, DMK had announced that Karunanidhi was suffering from allergy "caused by a medicine he has been using" and advised rest by doctors.

Though active for his age, the veteran DMK leader is not seen regularly in public and has been reacting to key issues and developments through his statements.

The DMK general council meet scheduled for December 20, where party treasurer M K Stalin was expected to be declared working president, had to be cancelled in view of Karunanidhi's hospitalisation.

The DMK chief also had to skip campaigning for the November 19 polls to three constituencies in Tamil Nadu and instead appealed to voters through a statement to vote for his party.