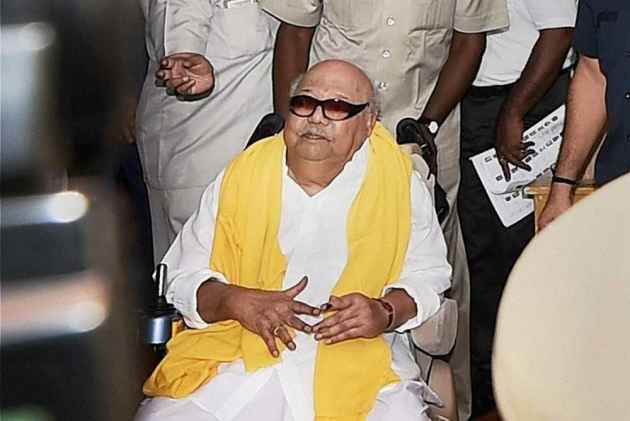 Print
A
A
A
increase text size
Outlook May 30, 2017 19:13 IST DMK Asks Cadres To Avoid Visiting Karunanidhi On Birthday As Per Doctors' Advice

DMK today asked its cadres to avoid visiting party chief M Karunanidhi on his birthday on June 3 as per doctors' advice.

Party working president M K Stalin, meanwhile, unveiled a website "wishthalaivar.Com" to send greetings to the nonagenarian leader online and he posted his wishes, the first on the new site.

Stating that the health of Karunanidhi had improved to some extent, the party headquarters in a release said doctors have however advised against personal visits to prevent the top leader from acquiring infections.

Doctors have strictly said "no to personal visits and advised more rest," the party said.

Appealing to the cadres to extend cooperation in this regard, the party said avoiding visiting him was the "best birthday gift."

All arrangements were being made for grand celebration of Karunanidhi's birthday and the diamond jubilee of his legislative career, the main opposition party said.

A public meeting will be held here in which national leaders will participate, the party added.

Karunanidhi has not been seen in public for the past several months due to health issues.

Stalin on Sunday had said if doctors permitted, the former Chief Minister might take part in the celebration of his birthday as well as diamond jubilee of his legislative career.