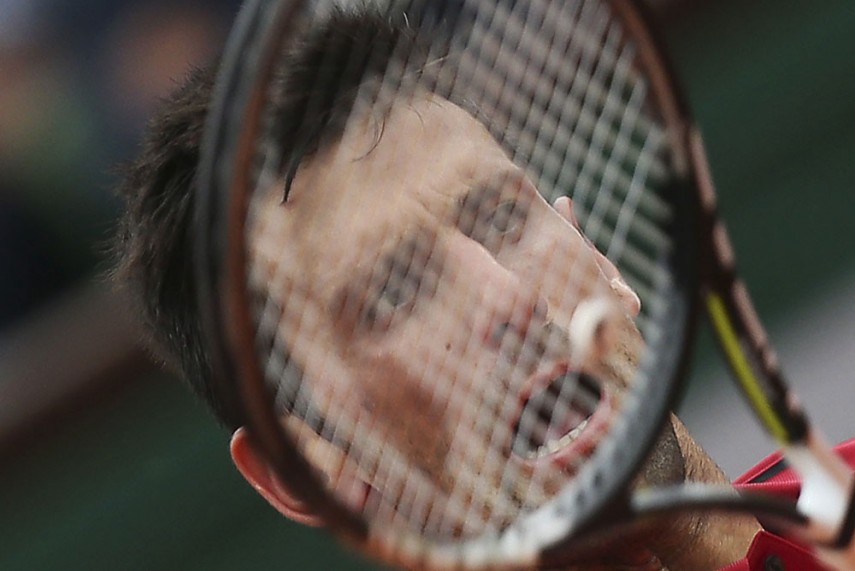 Novak Djokovic captured a first French Open at the 12th time of asking on Sunday, becoming just the third man in history to hold all four Grand Slam titles at the same time.

Djokovic, 29, also put himself halfway to the calendar Grand Slam, last achieved by Laver 47 years ago.

But he did it the hard way as the final reached its conclusion, being broken in the eighth game of the fourth set as he served for the title and then squandering two Championship points in the 10th before he sealed victory when Murray netted a backhand.

"It's a very special moment, the biggest of my career," said Djokovic, one of only eight men to complete the career Grand Slam and who had lost his previous three finals in Paris.

"I felt today something that I never felt before at Roland Garros, I felt the love of the crowd."

Djokovic imitated former three-time champion Gustavo Kuerten by drawing a giant heart in the Paris clay before collapsing inside it.

"I drew the heart on the court, like Guga who gave me permission to do. My heart will always be with you on this court."

Playing in his 20th final at the majors and sixth in succession, the Serb superstar is the first man since Jim Courier in 1992 to win the Australian and French Opens back-to-back.

Victory also allowed Djokovic to stretch his winning record over 29-year-old Murray to 24-10 overall and 8-2 in Grand Slams.

Murray, the world number two and the first British man in the final in Paris since Bunny Austin in 1937, remains with two Grand Slam titles as he failed to become the first winner of the French Open since Fred Perry 81 years ago.

Before a ball was hit, spectators stood to applaud Muhammad Ali after an image of the boxing legend, who died Friday, appeared on the giant video screen high up on the Philippe Chatrier court.

Djokovic admitted to a pre-match TV interviewer that it was certain to be an emotional afternoon although he was quickly into his stride, breaking Murray to love in the first game and shrugging off having to play five days in the last six.

The British star broke back to level before reeling off the next four games for a 4-1 lead as Djokovic's game quickly and unexpectedly unravelled.

Murray remained in charge, finding time to loudly berate a French television interviewer for climbing uninvited into his player's box overlooking the court.

Djokovic then argued with umpire Damien Dumusois for refusing to have a point replayed at 15-0 as Murray served for the first set. But the Serb was horribly out of sorts even before that spat with his 13 unforced errors proving fatal.

The world number one had to shake off a break point in the opening game of the second set before Murray obligingly imploded, dropping serve to fall 2-0 behind.

Djokovic misread the geometry on a dropshot which would have given him a double break in the fourth game but he was soon 4-1 to the good.

The top seed remained ruthlessly dialled-in, broke again for 5-1 and levelled the final when Murray dumped a service return into the net.

Djokovic, with the Paris crowd loudly on his side for the first time in four final appearances, broke for 2-1 in the third set which became 4-1 off a sublime running, backhand, cross-court drop-shot.

The Serb saved four break points to go to 5-1 before securing the set against a weary-looking Murray who had spent five hours longer on court than Djokovic and played two five-setters in the opening rounds to get to his first French Open final.

Djokovic kept his foot on Murray's throat, breaking in the first game of the fourth set as the second seed carried on a running argument with the umpire over the positioning of the overhead camera.

The Serb broke to love for 5-2 and history was just moments away. However, there was still time for a twist as he cracked when serving for the title before finally sealing the triumph after three hours on court.