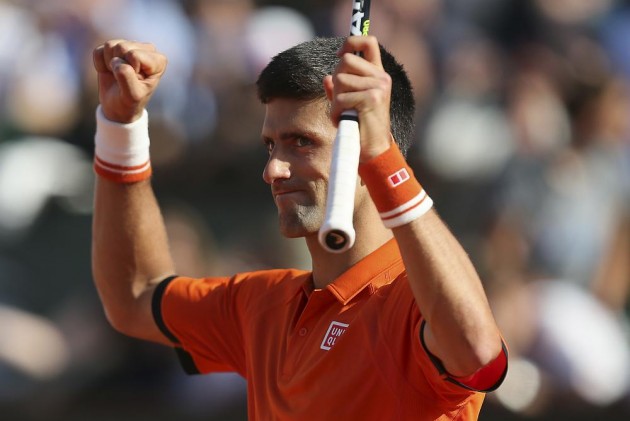 It was world number one and top seed Djokovic's first win over Nadal in seven meetings in Paris, avenging his defeats in the 2012 and 2014 finals.

It also eased Djokovic, who fired 45 winners to Nadal's 16, closer to a first French Open title and the completion of a career Grand Slam.

He will play his 26th career Grand Slam semi-final on Friday against either British third seed Andy Murray or Spain's 2013 runner-up David Ferrer.

For Nadal, it was a sobering way to mark his 29th birthday with the comprehensive loss placing a serious question mark over whether he will be able to achieve his dream of a 10th French Open crown.

The defeat, just his second in Paris in a decade after a fourth-round exit to Robin Soderling in 2009, will probably also see him slip out of the world top 10 for the first time since 2005.

But the nine-time champion roared back to 4-4, finally finding his range with his trusty forehand.

Nadal faced down three set points in the 10th game, also shrugging off a time warning from umpire Cedric Mourier for exceeding the 20-second limit between points.

After a 12-minute game, Nadal held for 5-5 and saved two more set points in the 12th game before Djokovic sealed it with a low, searing cross-courter which Nadal could only scramble towards in a desperate attempt to reach it, succeeding in only pushing the ball wide.

Despite being a set to the good, the top seed was as unhappy with Mourier as Nadal, complaining over the court being watered at the break.

Djokovic calmed down enough to have Nadal under siege again in the second set, breaking for 5-3.

Nadal saved three set points in the ninth game, but he was powerless on the fourth.

Djokovic set it up with a breathtaking, no-look backhand volley and converted it into a two-set lead when Nadal netted another drive.

In a crucial illustration of his dominance, Djokovic conjured up 13 winners in the set to just four for Nadal.

For the Spaniard, it was the first time in his career he had lost the first two sets of a French Open match.

His last comeback from two sets down at a Grand Slam was at Wimbledon eight years ago against Russia's Mikhail Youzhny.

He looked and played like a beaten man in the third set as Djokovic raced out to a decisive 4-0 lead and the Serb claimed victory on Nadal's second double fault of the tie.