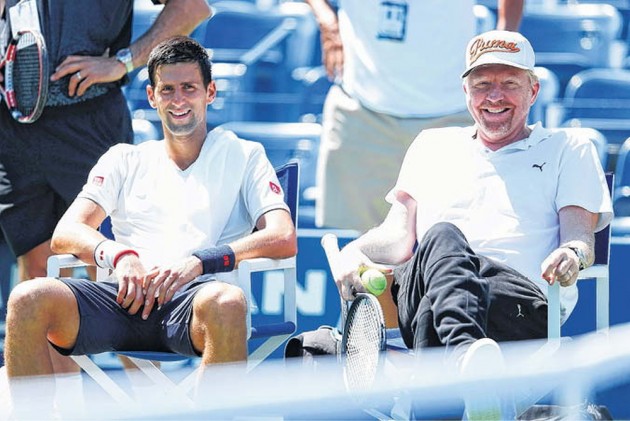 Novak Djokovic and coach Boris Becker are splitting up after three seasons and a half-dozen Grand Slam titles as a pair.

Djokovic posted a statement on Facebook on Tuesday, saying the duo "jointly decided to end our cooperation."

"The goals we set when we started working together have been completely fulfilled, and I want to thank him for the cooperation, teamwork, dedication and commitment," Djokovic's posting said.

"On the other hand, my professional plans are now directed primarily to maintain a good level of play, and also to make a good schedule and new goals for the next season. In this regard I will make all future decisions."

Of Djokovic's 12 career major singles trophies among men, trailing only Roger Federer with 17, and Pete Sampras and Rafael Nadal with 14 apiece half came while working with Becker.

Djokovic also was the runner-up at three other Grand Slam tournaments during his time with Becker, meaning the Serb made it to the finals at nine of the 12 majors during their partnership.

Becker also was around for Djokovic's first French Open title in June, which allowed him to become the eighth man to complete a career Grand Slam at least one championship at each of tennis' four most important events and the first in nearly a half-century to win four major tournaments in a row.

At Roland Garros, Djokovic was asked about working with Becker, a six-time major champion as a player in the 1980s and 1990s and part of a recent wave of past stars, who signed up to coach current stars.

"The last couple of years, I had some great times with him," Djokovic said, explaining that Becker taught him from a "psychological point of view, how to handle things on the tour, on and off the court."

"His contribution to the team is definitely big, and so everything works in harmony so far," Djokovic said at the time.

"How long it is going to go for, we don't know. We go year by year. So at the end of this year, we will see if he goes for another year."

After Djokovic's triumph in Paris, his season went off course. He was upset in the third round at Wimbledon by Sam Querrey and in the first round at the Rio de Janeiro Olympics by Juan Martin del Potro, then lost the No 1 ranking to Andy Murray last month, finishing 2016 at No. 2.

With Becker in his corner, Djokovic finished 2014 and 2015 atop the ATP rankings.