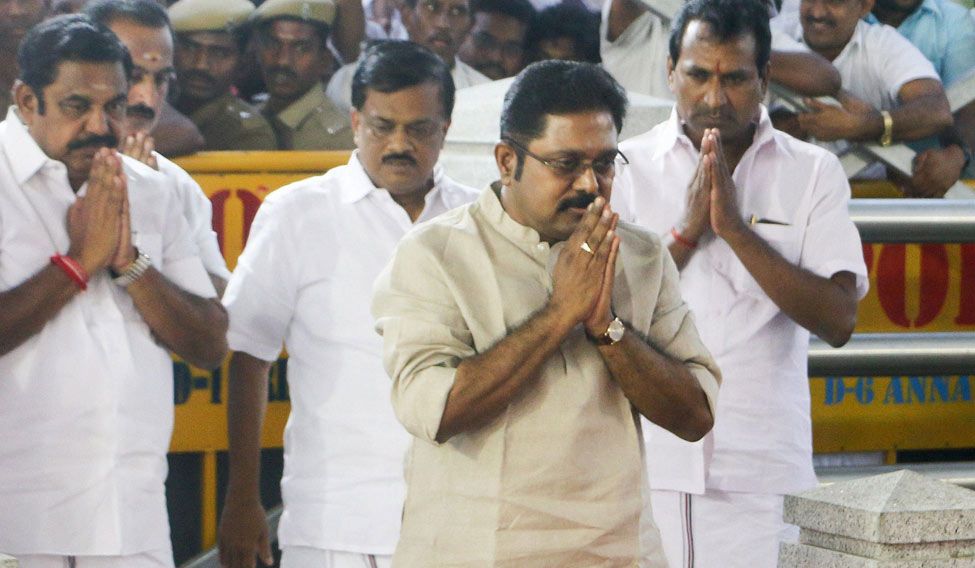 Print
A
A
A
increase text size
Outlook April 22, 2017 16:36 IST Dinakaran Appears Before Delhi Police For Questioning In Connection With Bribery Case

AIADMK (Amma) leader TTV Dhinakaran was today questioned by the police here over an alleged attempt to bribe an EC official for retaining the 'two leaves' party symbol and the related money trail.

It is learnt that an ACP ranked investigating officer quizzed Dhinakaran, the nephew of jailed AIADMK chief Sasikala.

"Dhinakaran is being asked about the money trail, his association with Sukesh (Chandrasekar) and whether he has met any Election Commission official or not. After this, there is high possibility of cross-questioning of the two," a senior police official said.

Dhinakaran's lawyers were not allowed to accompany him during the questioning by the Crime Branch of Delhi Police which began at around 3 PM at its Chanakyapuri Inter State Cell office amid tight security.

His call logs, WhatsApp messages and SMSes are also being examined, police said.

He had come under scanner after the arrest of alleged middleman Sukesh. Since then, Dhinakaran has maintained he does not know Sukesh and has never met him.

There was heavy security outside the office and mediapersons weren't allowed to enter the premises. Even local residents were asked to show identity cards before entering the area that houses the office.

The controversial AIADMK leader had earlier been served summons by Delhi Police at his Chennai residence in the case.

Dhinakaran, who was appointed as Deputy General Secretary by Sasikala, has been isolated in his party amid moves to merge rival factions led by Tamil Nadu Chief Minister E K Palaniswami and his predecessor O Panneerselvam.

A powerful section of the ruling AIADMK (Amma) recently revolted against Sasikala-Dhinakaran leadership. The development came after Panneerselvam, who is leading the rival faction, demanded ouster of Sasikala and Dhinakaran as a condition for the merger.

Dhinakaran later announced he would stay away from party affairs and that he could be removed only by Sasikala.

Sasikala is at present serving a four-year jail term in Bengaluru in a disproportionate assets case.