Digvijay Hits Back at BJP, Rakes Up Rajnath's Alleged Meet With Pragya Thakur 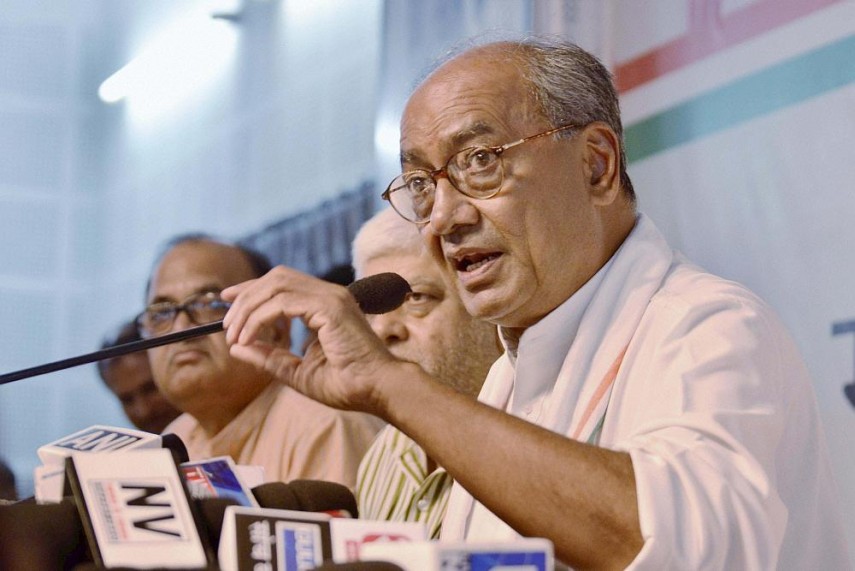 Print
A
A
A
increase text size
Outlook July 08, 2016 13:05 IST Digvijay Hits Back at BJP, Rakes Up Rajnath's Alleged Meet With Pragya Thakur

He also posed a question to the ruling BJP, wondering what it would say about Sri Sri Ravi Shankar sharing the stage with Zakir.

"I am being criticised for sharing stage with Zakir Naik but what about Rajnath Singh ji meeting bomb blast accused Pragya Thakur ?"

"Pragya is an accused in bomb blast. Is there a case against Zakir Naik as yet? What about Sri Sri Ravi Shankar ji sharing stage with Zakir ?", he said in a series of tweets.

The Congress leader has in the past too alleged that Rajnath Singh had met Pragya in jail when BJP was in the opposition. Rajnath Singh, who is now the Union Home Minister, had then denied meeting her.

Digvijay Singh is being targeted by the BJP after surfacing of a 2012 video showing him praising Zakir, who has come under government scrutiny after reports emerged that some of the terrorists involved in Dhaka cafe attack were inspired by him.

BJP said Zakir was a "threat" to national security as it was clear from his speeches that he "incited" people.

"Terrorism is enemy of humanity. Anybody who directly or indirectly abets it is guilty. People like him (Zakir) are a threat to our national security. Government agencies should decide on action against him under the existing legal system. It is clear that he incited people," party national secretary Shrikant Sharma said yesterday.

Citing Digvijay's comments, he said, "It is in Congress' character to politicise and glorify terrorism. Its leaders used terms like Hafiz saab and Osama ji for terrorists.

"They questioned the sacrifice of Inspector Mohan Chand Sharma in Batla House encounter and claimed their president Sonia Gandhi cried whole night over the killings (of terrorists) in the encounter."

Digvijay has defended himself, saying if there was any evidence against the preacher, then the Indian and Bangladeshi governments should take action against him.

"I have appealed for communal harmony and opposed religious fundamentalism and terrorism by either Hindus or Muslims," the Congress leader had said.

Meanwhile, talking to PTI in Hyderabad, Digvijay Singh said the video showing him praising Zakir Naik was from a conference on communal harmony and anti-terrorism, adding, he "does not regret" sharing dais with Naik at that event.

"I heard (at the conference) Mr Zakir Naik speak on communal harmony and spoke against terrorism and he explained how acts of terror are anti-Islam, which was a very good speech, and I said the same thing," he said.

Singh also urged the Centre to send Naik's YouTube speeches to forensic labs to check whether they are authentic or doctored.

"Now, people are bringing some YouTube speeches of Mr. Zakir Naik, where he is supporting acts of terror and he has gone public to say that those videos are doctored and they are not his speeches. The government of India, which is sleeping for the past two years on this issue, should send those tapes to Forensic Science Laboratory and get it examined whether they are genuine or doctored. Why hang a person without trial," he said.

Speaking at another function in Hyderabad, Singh hit out at the BJP over the Naik issue, asking why no action has been taken against the preacher if he has spoken on spreading terror as the party is in power both at the Centre and in Maharashtra.

The Congress veteran said Naik did not make provocative speech at the 2012 event in Mumbai, where he was also present, and only talked about communal harmony and Hindu-Muslim unity.

"Now, they remembered it after four years. They are publicising it in such a way that they are not worried about Zakir Naik but worried about Digvijay Singh," the former Madhya Pradesh Chief Minister said.