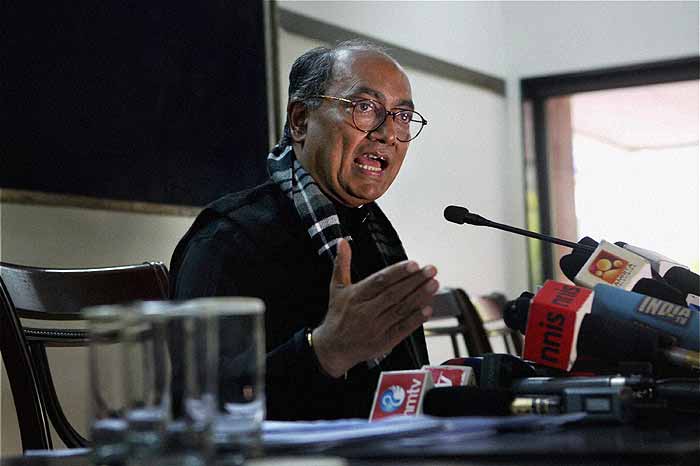 outlookindia.com
-0001-11-30T00:00:00+0553
Under attack over his claim about a call from Hemant Karkare, Congress leader Digvijay Singh today produced record of the conversation the slain ATS chief had with him on 26/11 and sought an apology from Maharashtra Home Minister R R Patil and all others who had dubbed him a "liar".

Singh released the details of the call records he obtained from BSNL's Bhopal office at a press conference here, three weeks after his remarks about the call created a controversy which even resulted in the AICC distancing itself from the matter.

"People called me a liar...I was dubbed a traitor and a Pakistani agent. It pained me that Mumbai Police made selective leaks saying that there were no records of the talks between me and Karkare," Digvijay said.

"It was all the more painful for me when the Maharashtra Home Minister said in the state Assembly that no such call was made. All those who have dubbed me a liar and have put a question mark on my honesty, sincerity and credibility should apologise or at least express regrets now when I have produced documents," Singh said.

He said a letter from BSNL about the call records proves what he had said.

"The call came from his (Karkare's) office landline on my mobile phone number 9425015461," Singh said adding that Karkare's number was the official telephone number of the Maharashtra Anti-Terrorism Squad.

According to the records released by Singh, the ATS chief rang him up at 17.44 hours and the conversation continued for more than six minutes. Hours later, Karkare was killed in the 26/11 terrorist attacks in Mumbai.

The Congress General Secretary had stoked a controversy with his claim that Karkare had called him on the day of the Mumbai terror strikes, saying that he feared for his safety from Hindu extremists.

He later asserted that he had never doubted the role of Pakistani elements in 26/11 strikes and had never said that right-wing activists were behind the terror attacks. "But, it is a fact that I am on record saying that he (Karkare) was being threatened by some right-wing activists," he had said.

Digvijay utilised the opportunity to attack the Maharashtra Home Minister as RSS and BJP had targeted him on the issue. He also claimed that bomb blasts in the country have stopped after the arrests of "RSS- affiliated people" in the Malegaon blast case by Karkare.

"What is the reason that blasts have virtually stopped in recent months except the German Bakery blast in Pune and the recent one in Varanasi after the arrests in Malegaon case," he said, seeking a probe by the National Investigation Agency (NIA) into all terror-related cases.

In a letter to Patil, he said, "I am very pained by the statements made by you and the Mumbai Police. I request you to make a public apology or express regret".

The Congress leader expressed anguish that these statements were used by the media to prove him false and declare him a "liar". "If you or Mumbai Police had properly examined the number of Maharashtra ATS, you would not have given such a statement."

Congress had earlier distanced itself from Digvijay's statement, saying the matter was "a conversation between two individuals".

Raising doubts over his claims, Patil had then said there was no existence of any record of the purported telephonic conversation between the Congress leader and Karkare.

At the press conference today, Singh made it clear that Mumbai terror attacks and threats to Karkare were two separate issues and should not be mixed.

"I saw no conspiracy in 26/11. Only Pakistani terrorists were involved in the act and there is no doubt in that." The other issue was that Karkare had arrested "RSS-affiliated people" in the Malegaon blast case after which BJP and RSS leaders had brought allegations against him, he said.

He alleged that those arrested in the murder of RSS activist Sunil Joshi were only "foot soldiers of the RSS" who carried out the killing for which the orders came from "above." He said that since police in BJP-ruled Madhya Pradesh "cannot investigate" the case, it should be transferred to a central agency.

Quoting from the chargesheet of the Malegaon blast case, he alleged that all the accused were there in a function at Swami Aseemanand's Shabari Dham in Gujarat in which then RSS chief K S Sudarshan and incumbent Mohan Bhagwat were also present. He wanted Home Minister P Chidambaram to inquire into the bank accounts of Shabari Dham and Vanvasi Kalyan Ashram and probe into the issue of who were their principal donors.

He also asked why BJP feels "pain" when these people are arrested. "If there is proof against them, why BJP launches a campaign in their support in the whole country?"