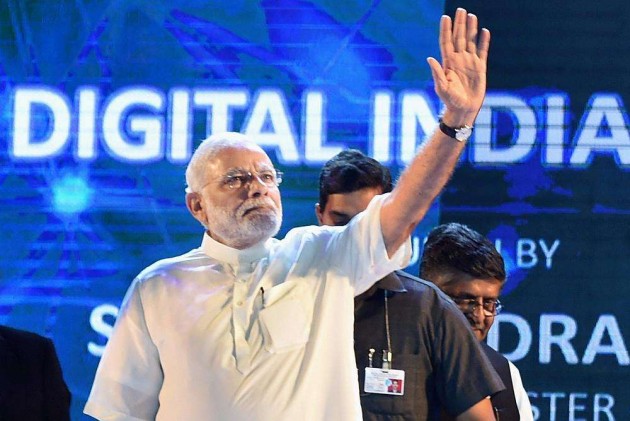 Top CEOs from India and abroad today committed to invest Rs 4.5 lakh crore for the Modi government's ambitious 'Digital India' campaign to provide telephony and fast internet for all, with more than half of the promised investments announced by Mukesh Ambani alone.

The launch ceremony of Digital India week by Prime Minister Narendra Modi, at the packed Indira Gandhi Indoor Stadium, was attended by who's who of India Inc, as also top executives of a number of foreign companies, who committed huge investments in creation of infrastructure and setting up of manufacturing units.

The investments announced today will lead to creation of 18 lakh jobs, IT and Telecom Minister Ravi Shankar Prasad said at the event.

Reliance Industries Chairman Mukesh Ambani pledged an investment of over Rs 2,50,000 crore in rollout of wireless broadband infrastructure and manufacture of mobile handsets.

The company is working with leading device manufacturers encouraging them to Make in India smartphones and internet devices at an affordable price, he said.

Bharti group chief Sunil Mittal said his group will invest more than Rs 1 lakh crore in the next five years in networks and deeper infrastructure for taking 4G connectivity to the masses, e-health and taking e-education in every village.

The company will also collaborate with various manufacturers around the world to start manufacturing in the country to provide electronic products at the most affordable prices and reduce the burden of electronics import in this country.

Besides, he also announced a USD two billion investment over the next five years specifically for Digital India plans.

"Our investments in the telecom industry have been in excess of USD 15 billion wherein we have laid 1 lakh kms of fibre...To further improve this digital infrastructure, we plan to invest an additional USD 7 billion over the next five years in areas such as network rollout, broadband and Wi-Fi deployment," Birla said.

Digital India Week is part of a campaign to universalise phone connectivity and provide fast Internet connections for all to create an IT-enabled society.

The tech push, under which the government on its own is investing Rs 113,000 crore, aims to provide electronic governance, bridge digital divide and bring in large investments in technology manufacturing. It aims to stop net imports of technology and electronics by 2020, while creating over 100 million jobs.

Billionaire Anil Agarwal-led Sterlite Technologies will set up an LCD panel manufacturing plant in the country with an investment of Rs 40,000 crore, which will generate about 50,000 jobs.

Besides, the firm, which makes optical fibres used in high speed Internet services, is also working on a project to connect defence establishments through optical fibres in Jammu & Kashmir (J&K).

"Sterlite Technologies under the Digital India theme will also set up a LCD manufacturing plant in the country with an investment of Rs 40,000 crore which will generate about 50,000 jobs," Agarwal said.

Besides, Japanese firm Nidec Corporation announced to invest USD 1 billion in India and employ 25,000 people over next 10 years.

Taiwan-based Delta Electronics, which deals in energy products, announced to invest USD 500 million over next 10 years with the hope that this investment will create 20,000 new jobs in the country.