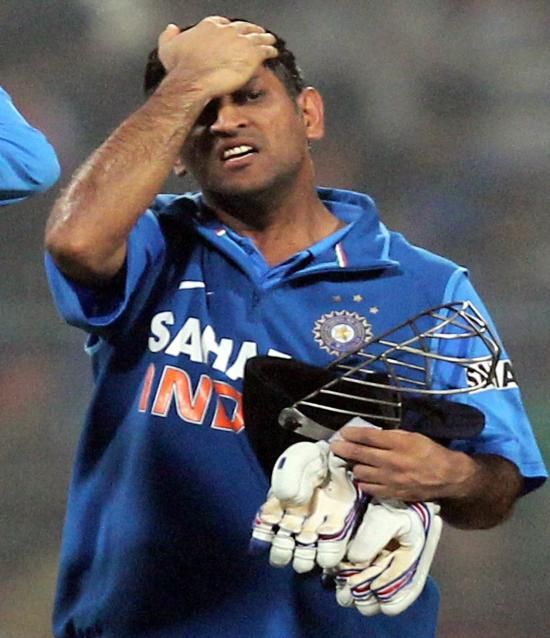 Licking the wounds of yet another series defeat, India's struggling cricketers will seek to restore some pride when they go into the last one-dayer against arch rivals Pakistan here tomorrow with their captain M S Dhoni being a doubtful starter because of a sore back.

The collective failure of the top order batsmen even in home conditions has hurt the team badly in recent times and the hosts will need a huge spark of inspiration to prevent the spirited Pakistanis from achieving a 3-0 clean sweep.

Dhoni's injury has compounded India's misery and the team management will wait till tomorrow before taking a final decision on his avaibility for the match. Wicketkeeper-batsman Dinesh Karthik has been called up as a back-up.

"If at all somebody is doubtful, it's me. I have a sore back and we have called Dinesh Karthik as back up", Dhoni said.

Yuvraj Singh also skipped the practice session but Dhoni made it clear that there were no injury problems with him. "Since it was an optional practice session, Yuvraj did not come," he said.

Asked who will lead the side if he does not recover in time, Dhoni said, "Let's hope that I play. We'll see tomorrow."

Clearly, the pressure will be on the Indians who have been plagued by an inexplicable form slump of their star batsmen while the limited and inexperienced bowling resources have compounded the misery for the hosts who have now sunk to a new low with the recent debacles.

With the series already out of their grasp, the Indians may experiment by giving a chance to some of their bench players but whether they can change the team's sliding fortunes remains to be seen in a day-night game which will start at noon to neutralise the dew factor.

Dhoni, in good form with the bat, has been at a loss to explain the repeated failures and there have been suggestions that he should promote himself up the order considering the poor form of the top half.

The hosts lost the first game in Chennai by six wickets and the second in Kolkata by 85 runs to give their arch foes their first series win on Indian soil since 2004-05.

Unless the Indians put up a far better display, the Ferozeshah Kotla could be a witness another drubbing for the struggling hosts.

Ajinkya Rahane, who has surprisingly not played a single match despite his decent showing in the two T20 games prior to the ODI series, is almost certain to feature in the playing eleven tomorrow.

The two experienced openers -- Virender Sehwag and Gautam Gambhir -- have invariably failed to give a good start and that has hurt the team badly. The Indians may contemplate benching either Sehwag or Gambhir and let Rahane open the innings.

The form of Virat Kohli, Yuvraj Singh and Suresh Raina has been patchy and none of them have shown consistency nor have they shouldered the responsibility.

In the absence of retired greats like Sachin Tendulkar and Rahul Dravid, the experienced players in the team have not shown the willingness to take the batting load.

Dhoni has acknowledged time and again that the batting has let the team down.

"It's important to back players. Yes, we are going through a tough period but we field the best eleven. If we go by criticism or by media, probably we would need 30-40 teams. Had I put myself under such pressure, I would have broken down by now," he said.

The beleaguered Indian batting line-up could come under more pressure if Dhoni sits out tomorrow. He has been India's top scorer in the series with a 113 not out in the first match in Chennai and an unbeaten 54 in the second in Kolkata.

Asked if it would be a setback for Indian batting, which has been struggling to put up decent scores against Pakistan in the first two matches, Dhoni replied in the negative.

"Nobody is irreplaceable. I am sure if Dinesh plays tomorrow, he will bat as good as I batted in the last two games," he said.

India's bowling also does not have the bite to pose much problems for the strong Pakistani batting line-up which has been well-served by left-handed opener Nasir Jamshed who has cracked back-to-back centuries.

The trio of Ishant Sharma, Ashok Dinda and Bhuvneshwar Kumar neither have the pace nor the consistency to evoke any confidence while spinners R Ashwin and Ravindra Jadeja have also not been in the of best form.