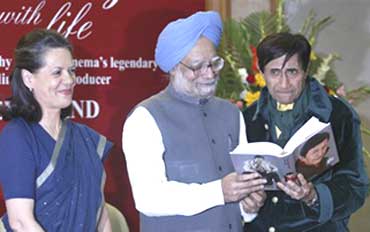 It was a birthday function with a difference today for Prime Minister Manmohan Singh and the evergreen Dev Anand.

Singh released the autobiography of the "immortal" film personality, noting that the 'chocolate hero' has possibly acted with every top heroine over five decades -- from Suraiya and Waheeda Rehman to Madhubala and Zeenat Aman.

Congress President and UPA Chairperson Sonia Gandhi was prominent at the function, which saw the actor hailing her as also Singh for "their capacity to take the country skywards so that it becomes an envy of the world."

Speaking about the book titled 'Romancing with Life', Anand said "from an ordinary boy, a non-entity, to now, as I stand here in front of you today, this book is about 62 years of my struggles ... (about) my joys, my sorrows, my highs and my lows. It is an honest depiction of a man with all his strengths and weaknesses."

Dressed in a velvet bottle green jacket and trouser with a matching scarf, the actor-director-producer said it was "a book of the people who have given my life to me. Now I am giving it back to them".

Recalling that Anand's childhood and youth were marked by deprivation and dislocation due to the partition which forced him to migrate to free India, Singh said "the trials and tribulations of those difficult years did not warp his personality, nor did they stunt his talent."

Soon, Anand discovered his true calling in the Indian cinema and rose to become "one of the trinity who ruled the hearts of every Indian -- Raj Kapoor, Dilip Kumar and Dev Anand", the Prime Minister said.

Expressing hope that his biography would inspire newer generations to aspire for a life of greater creativity, he said Dev Anand's was "a classic rags to riches life, where those riches have been earned through dint of sheer hard work and dedication."

Maintaining that the "Sun never sets on Indian films", Singh said "Hollywood may have more money invested in it, it may be bigger business, but I am sure that more people across the world actually watch Bollywood movies!

"More people laugh and shed tears, more people sing and cheer watching an Indian film," he said observing that the Indian film industry had made its presence felt whichever country he had visited.

The Prime Minister also observed that no other institution had been as successful as the film industry in achieving "emotional integration" of this diverse nation.

"It is not the official or government Hindi that unites the length and breadth of this country, but in fact popular spoken Hindi, as popularised by Hindi cinema. It is a unique language, a mix of 'shudh' Hindi, of spoken dialects like Bhojpuri and Hyderabadi and of spoken languages like Urdu and Marathi. This unique mix of conversational Hindi has become the thread that weaves us all together."