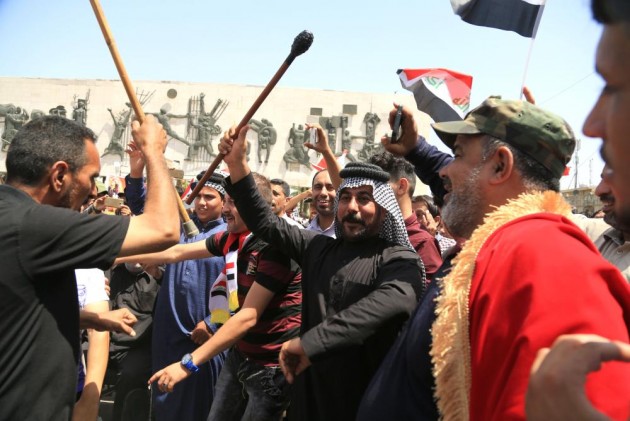 Several hundred demonstrators took part in a renewed sit-in in central Baghdad today to call for reforms, following another that lasted for two weeks last month.

The protesters began gathering at Baghdad's Tahrir Square yesterday following the failure of a parliamentary session aimed at selecting a replacement for the speaker.

Iraq has been hit by weeks of political turmoil surrounding Prime Minister Haider al-Abadi's efforts to replace the cabinet of party-affiliated ministers with a government of technocrats.

"Our sit-in aims to end the political quotas," said Mohammed Khayoun, one of the participants in the demonstration, referring to senior government positions being shared out among parties.

Imad Shaeet, another participant, said that: "Our demands are for reform aimed at securing our future and the future of our children."

Powerful Shiite cleric Moqtada al-Sadr organised a two- week sit-in in March outside Baghdad's heavily-fortified Green Zone, where the government is headquartered, but called it off after Abadi presented a new cabinet lineup to parliament.

The premier has faced significant opposition to his cabinet reform efforts from powerful political parties that rely on control of ministries for patronage and funds.

Both the United Nations and Washington have warned that the political wrangling could undermine Iraq's fight against the Islamic State jihadist group, which overran large areas in 2014 but has since lost significant ground.

Political blocs submitted their own ministerial candidates, leading to a second lineup on which most of Abadi's nominees were replaced.

Lawmakers then began a sit-in at parliament, while two subsequent sessions ended in a fistfight and a vote to remove speaker Salim al-Juburi, overshadowing the cabinet issue.

Juburi insists the session at which MPs voted to sack him lacked a quorum and that the decision is therefore invalid, but his opponents say the move was legitimate.

They attempted to hold a session yesterday aimed at selecting replacements for Juburi and his deputies, but it collapsed after 23 MPs from the Shiite Badr bloc announced they would not participate, meaning it lacked a quorum.