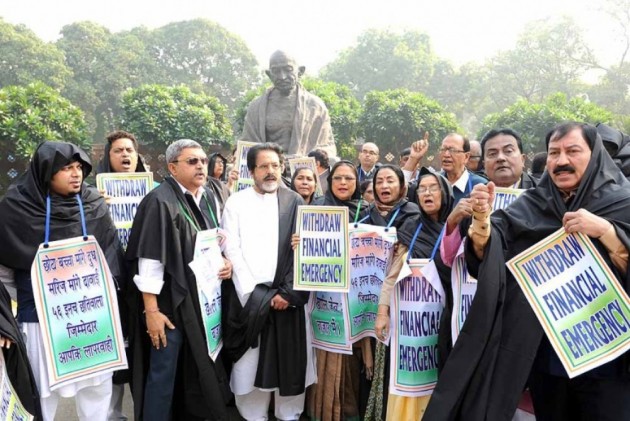 A combined opposition disrupted the proceedings of Lok Sabha for the fourth consecutive day on Monday, demanding discussion on demonetisation under a rule that entails voting, leading to adjournment of the House twice.

As soon as the proceedings began and the House paid tributes to those killed in a train accident in Kanpur on Sunday, Congress, TMC, Left parties, Aam Aadmi Party stormed the Well demanding admission of an adjournment motion to discuss the demonetisation of Rs 1000 and Rs 500 notes under Rule 56, which ensures voting.

However, Parliamentary Affairs Minister Ananth Kumar said the government was ready for the debate if the opposition allowed the discussion under Rule 193 that does not entail voting or passage of a resolution. The opposition however rejected the proposal.

As the joint opposition continued to shout slogans and raise banners claiming that common people have been suffering due to the demonetisation announcement by Prime Minister Narendra Modi on November 8, Speaker Sumitra Mahajan initially declared that she would not adjourn the House and continued the Question Hour amidst vociferous slogan-shouting.

When some TMC members tried to come near HRD Minister Prakash Javadekar who was replying a question related to his Ministry with banners reading "Financial Emergency", an upset Mahajan told the opposition that she would tell the Lok Sabha TV authorities to show them on the TV screen and asked them not to disturb the Minister.

"If you want to come on TV, I will tell the Lok Sabha TV people to show you, but don't disturb the Minister," she said.

At this, Congress leader in Lok Sabha Mallikarjun Kharge told Speaker that they were protesting in the House not to come on TV but due to the "sufferings" of the common people.

"We are not here to be in the TV. We want to debate but the government is not listening to us," Kharge said.

Congress Vice President Rahul Gandhi was present in the House. While NCP MPs were standing in the aisle supporting other Opposition members over the demonetisation issue, AIADMK members were also on the aisles raising the issue of Tamil fishermen injured allegedly in firing by Sri Lankan Navy.

As the pandemonium continued, the Speaker adjourned the House for ten minutes after carrying out 50 minutes of the proceedings in the din. "It is unfortunate that you do not want the House to function," she said.

At noon when the House met for Zero Hour, the din continued even as Railway Minister Suresh Prabhu made a suo motu statement on the derailment of Indore-Patna Express in Kanpur rural area which has claimed over 133 lives so far.

"This is really very sorry. You do not want to hear the minister," Mahajan said adjourning the House for the second time till 2 PM.

When the Lok Sabha reassembled at 1400 hours, Opposition members again raised slogans seeking an adjournment motion on the demonetisation of 500 and 1000 rupee notes.

As Congress members rushed to the Well, Deputy Speaker M Thambidurai adjourned the House for the day, within a couple of minutes after it had reassembled.

Continue FREE with Ads Pay Rs. 1 to Read Without Ads
READ MORE IN:
Sumitra Mahajan National
Next Story : Demonetisation Effect: GDP To Fall By Up To 80 Bps,Says DBS
Download the Outlook ​Magazines App. Six magazines, wherever you go! Play Store and App Store