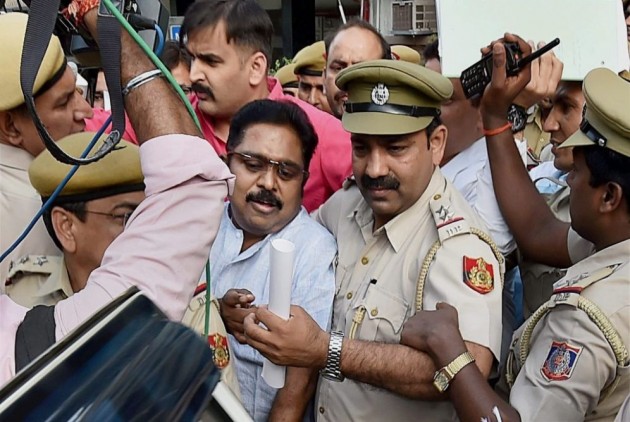 Sources said the questioning of the man, whose identity was not revealed, at suburban Adambakkam was part of the probe into the use of conduits for alleged illegal money transfers through the hawala route.

The development came as police arrested alleged an hawala operator,Naresh, at the Delhi Airport for involvement in "illegal transfer" of money to arrested middleman Sukesh Chandrasekhar by Dhinakaran.

The quiet neighbourhood in the city suburb was buzzing with police vehicles while journalists lined up the alleys and curious onlookers gathered around to know details.

Dhinakaran was arrested by Delhi Police on April 25 after four days of questioning for allegedly attempting to bribe an unidentified Election Commission official to get the undivided AIADMK's 'two leaves' election symbol for his faction.

He and his associate Mallikarjuna were brought here yesterday from Delhi and searches were conducted at their residences as part of the probe.

The police had secured warrants from a Delhi court for the purpose, that were part of efforts to gather "further evidence" in the alleged attempt by Dhinakaran to bribe EC officials.

Besides the two, others connected to them had also been questioned over illegal channels and conduits used for sending the money to Delhi, the sources had said.

Police had earlier said Sukesh Chandrasekar, the first to be arrested, had allegedly struck a Rs 50 crore deal to help the AIADMK (Amma) faction keep the two leaves symbol.

Police said they were are also verifying if Chandrasekar had approached any EC official for getting a favourable verdict for Dhinakaran's faction.

Dhinakaran, appointed deputy general secretary by jailed AIADMK chief V K Sasikala, is facing a revolt by influential section of state Ministers who have decided to keep the two out of party affairs.