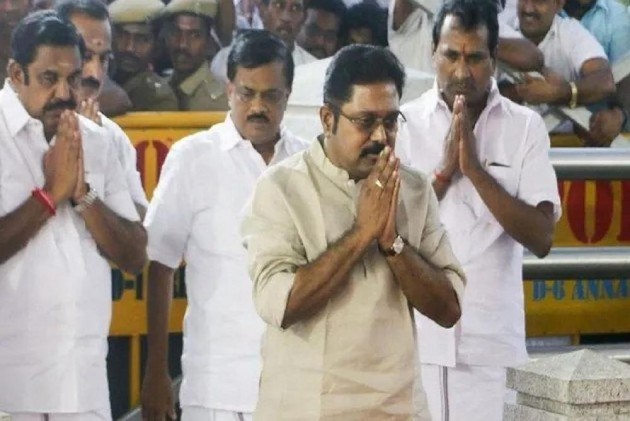 Delhi Police has issued a lookout notice against AIADMK leader TTV Dinakaran, accused of bribing an EC official to get the coveted 'two-leaves' symbol for his faction.

The action comes in the wake of inputs that Dinakaran was an NRI and could try to flee, police said.

The AIADMK (Amma) Deputy general secretary is already facing the heat as the K Palaniswami cabinet yesterday night revolted against him and decided to keep him and his family out of the party and the government. Dinakaran has convened a meeting of party MLAs in Chennai today.

Praveer Ranjan, Joint Commissioner of Police (crime) confirmed that the lookout notice has been issued and said that it was a preventive action.

Earlier the Crime Branch had arrested an alleged middleman, Sukesh Chandrashekhar here in connection with the matter.

He claimed that he had told Dinakaran that he will get a favourable verdict from the Election Commission of India in the party symbol case, he said.

The 27-year-old had told Dinakaran that he has contacts in the Election Commission and his contacts will help the Sasikala faction get the AIADMK's poll symbol of two leaves in a by-election to the R K Nagar Assembly seat in Tamil Nadu.

Police got on Chadrashekhar's trail after they received a tip-off from an informer about certain Election Commission officials being approached.

It has been learnt that he had struck a deal for Rs 50 crore for helping the AIADMK faction keep the 'two leaves' symbol, said an officer privy to the probe.

Till now, the middleman had allegedly got Rs 10 crore of the deal amount and the remaining amount was to be given to him in a time-bound manner.

There are chances he might be taken to Chennai to uncover the money trail.