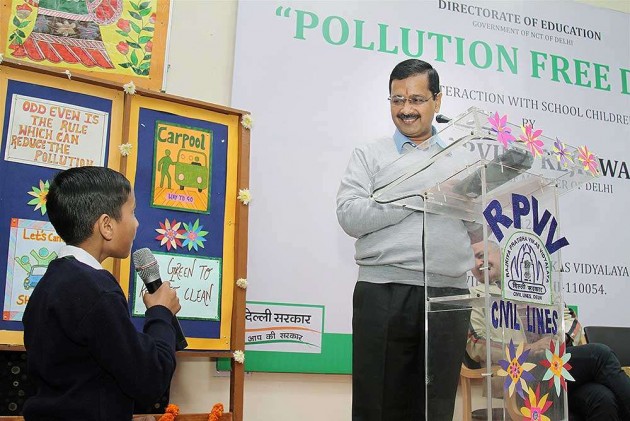 In a far-reaching decision, Delhi Government today scrapped management and all other quotas except for the Economically Weaker Sections in private schools for nursery admissions and warned institutions violating the the order could be taken over by the education department.

Announcing the decision taken at a meeting of the state's cabinet, Chief Minister Arvind Kejriwal called the management quota the breeding ground for "biggest scandal" in the education sector in the country and said his government will not be a "mute spectator" to it.

The government also scrapped 62 "arbitary and discriminatory" criterias listed by the schools on their websites for admissions. However, the 25 per cent quota for the Economically Weaker Section (EWS) will stay.

The decision came in the midst of the admission process for nursery classes in over 2,500 private schools in the capital.

"What is management quota? Under it, you get admission if someone is recommended by a chief Minister, education minister, judge, police commissioner, SHOs or by an income tax official. Either it is recommendations or seats are sold.

"Management quota is the biggest scandal in the country which the Delhi Government is scrapping. 75 per cent admissions in the private schools will be under open category. Other than EWS category, there will be no other quota," Kejriwal told a press conference.

Warning schools of stringent action in case of violations, he said the government will use all available options against erring institutions, including takeover.

"If they do not budge, they can be derecognised or government can take them over," he said, adding "the mafia had captured the education system and made it a business. The government will not tolerate this."

Kejriwal, with Deputy Chief Minister Manish Sisodia, who also holds the education portfolio, seated beside him, said the was taken to ensure that the admission process becomes pro-people and transparent.

Private schools in Delhi have quotas for management, siblings, alumni and many others. The decision also prohibits schools from making parents to declare details like whether they smoke or drink or consume non-vegetarian food.

The High Court, in an order, had asked the Delhi Government not to micro-manage the admission process following which the Education Department had allowed the schools to frame their respective criteria and put them on their websites.

Kejriwal said certain criteria put out by the schools were "very shocking" and in violation of Article 14 of the Constitution relating to equality before law.

"The Education Department officials told me that court has directed not to micro-manage the admission process. I told them not to worry. Tell the court that I have done this. I will tell the court that management quota is the biggest scandal and this should be stopped. And now the Cabinet has given its approval," said Kejriwal.

Kejriwal said some of the criteria put out by schools were not acceptable at all.

"Children of the those parents who eat non-vegetarian food, smoke or drink will not get admission. Those parents who know music and painting will get more marks. The criteria are so arbitrary, wrong and discriminatory. What does this mean?

"You have a handle in your hand and you will decide whom to give admission. It is not acceptable," Kejriwal said.

Listing out examples of quotas in different schools, he said one school had reserved 75 per cent seats under management quota and only 25 per cent were open.

"The court had not allowed quota. 25 per cent quota is for the EWS and you have to give 75 per cent seats for general category," he said.

Kejriwal said the government has in an order permitted the schools to give admission to children of staff, teachers or those in the management. "But it was clarified that it cannot be made a quota."

He said the government was considering forming a monitoring committee to oversee the admission process.

Sisodia said the government's intervention will not impact the ongoing admission process as the schools will finalise the nitty-gritty of the admission only after January 22.

"Before our 49-day government had come, the LG had come up with a list of criterion and given rating to each of them. So, the court had said you cannot formulate criteria. You have to give autinomy," said the Chief Minister.