Delhi: At Students' March, Rahul Demands Law for Their Protection 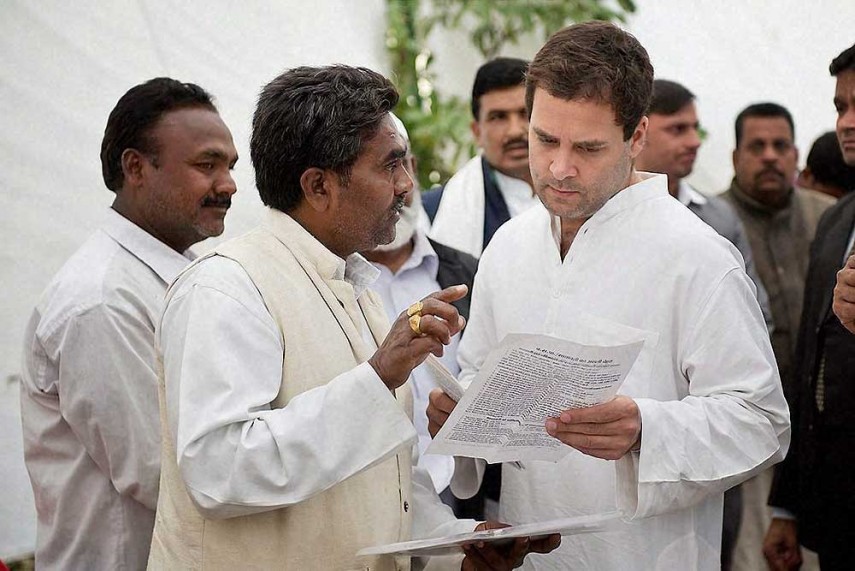 Print
A
A
A
increase text size
Outlook February 23, 2016 16:34 IST Delhi: At Students' March, Rahul Demands Law for Their Protection

Mounting a fresh attack, Congress Vice President Rahul Gandhi today accused Modi government and RSS of crushing voices of dissent of college and university students across the country and pitched for a law to protect them from "discrimination" and "suppression".

"We need a law to ensure that students in colleges and universities do not face discrimination and their voice is not stifled," Rahul said lending his support to hundreds of students who took out a march demanding justice for Hyderabad University research scholar Rohith Vemula, and Kanhaiya Kumar, the JNU student arrested on charges of sedition.

The Congress Vice President also slammed the government for not including issues like Rohith's death and difficulties being faced by students of universities in the President's address to Parliament today.

Accusing the Centre of muzzling the voice of students across universities in the country if they differ with ideology of RSS, Rahul said Congress will fight for bringing a law to check such "suppression".

He alleged that government was trying to suppress not only the youths but also the Adivasis, Dalits and other weaker sections.

"We don't want an India where an ideology is imposed upon us. We are fighting for it. RSS people want India to have one ideology, but we want an India of multiple voices and multiple ideologies," he said, amid loud cheers.

In the second such protest in less than a week, thousands of students from various universities across the country took to the streets in the capital protesting against the death dalit student Rohith Vemula and the ongoing row at JNU.

"This is RSS' ideology. They keep speaking about what happened in the past. They don't talk about the future. Rohith was talking about the present and the future.

"I heard President's address in Parliament. He spoke about government's achievement but nothing on Rohith issue, what's happening in the universities," said Rahul.

The protesters included students from various universities including Hyderabad university.

"We are demanding justice for Rohith, justice for Kanhaiya Kumar. This protest is also for Dalits, minorities and marginalised sections," said a participant.