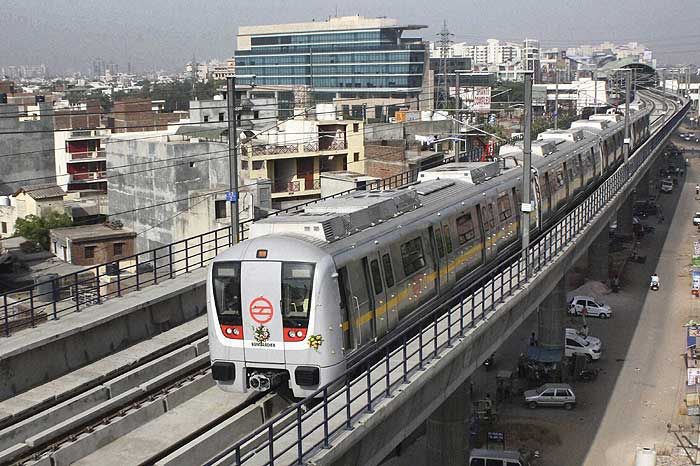 outlookindia.com
-0001-11-30T00:00:00+0553
After being shut for six months, Reliance Infrastructure-run Delhi Airport Metro Express would be thrown open for the public from tomorrow but trains will run at a drastically reduced speed of 50 km per hour.

Trains on the corridor were earlier running at a speed of 105 km per hour.

Commercial operations of the 23-km corridor that connects Connaught Place with Terminal-3 of the Indira Gandhi International Airport will begin at 5.30 AM on Tuesday morning.

However, check-in and baggage facilities for both international and domestic passengers would not be available for the time being.

Though resumption of services would bring smiles on the faces of commuters, an 18-20 minute journey from Connaught Place to the Terminal 3 of IGI Airport will hitherto take at least 30 to 35 minutes, effectively failing the purpose of a high-speed corridor.

"Reliance Metro's Airport Express Line would run daily from 5.30 AM to 11.30 PM at a frequency of 15 minutes. Reliance Metro has made arrangements to provide seamless connectivity for Terminal-1 passengers to Aerocity Station through shared cab and shuttle bus services," a Reliance Infra spokesman said.

As a promotional initiative, passengers can travel on the line at a discounted fare of Rs 30 tomorrow from anywhere to anywhere. On a normal day, the minimum fare is Rs 20 and the maximum is Rs 100.

The services would resume tomorrow six months after the Line was shut down for repairs in the civil structure. The Commissioner of Metro Rail Safety R K Kardam, who inspected the corridor last week, gave the green signal for resumption of service at a reduced speed of 50 km per hour.

The speed would gradually be increased after periodic inspections by the Delhi Metro. Trains on the corridor were run at a speed of 105 km per hour when the Line was shut on July 8, 2012.

In addition to single journey tokens, Airport Line has introduced new products in the form of Return Journey Tokens and Sunday/Holiday discount tokens while retaining the Monthly passes for regular commuters.

Baggage check-in infrastructure for both National and International travel are in place but the service of baggage check-in would start shortly, the spokesman said.

The reduction of speed comes a big blow for both Delhi Metro and Reliance Infra which have been claiming that trains can be run at a maximum of 120 km per hour.

Problems were also noticed in the clippings used in the underground section of the corridor. It is believed that the train speed can be increased only when the clipping issue is rectified.

The problems on the civil structure also led the Reliance Infrastructure offer to quit the Line citing financial non- viability.

But, Delhi Metro rejected the offer and the same is now referred to arbitration.
Continue FREE with Ads Pay Rs. 1 to Read Without Ads
READ MORE IN:
Business
Next Story : Delhi Rape: Court to Hold In-Camera Proceedings
Download the Outlook ​Magazines App. Six magazines, wherever you go! Play Store and App Store