Delay In The Merger Talk, AIADMK Factions Blame Each Other 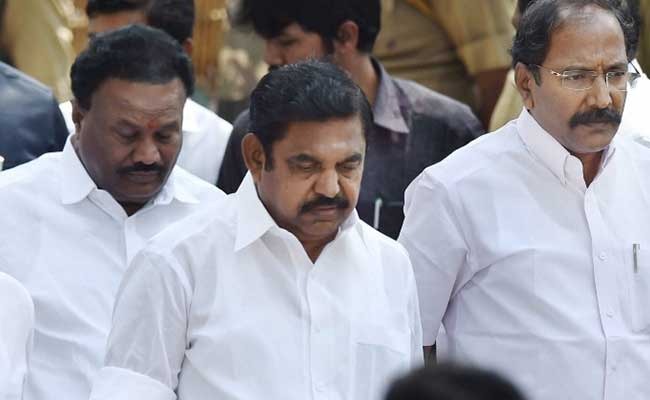 Print
A
A
A
increase text size
Outlook April 24, 2017 17:14 IST Delay In The Merger Talk, AIADMK Factions Blame Each Other

Days after the two factions of AIADMK announced panels for the merger talk, the move hit yet another roadblock today as both sides blamed each other for the "delay" in taking the proposal forward.

The O Panneerselvam led faction said the rival camp headed by Tamil Nadu Chief Minister K Palaniswami was "in a state of confusion", adding that some unseen hand was controlling it.

Rejecting the charges, the ruling camp asserted there was no confusion and it had already sent the invite for talks.

Meanwhile, the Panneerselvam camp has stuck to its demands of a CBI probe into the death of late chief minister Jayalalithaa and expulsion of General Secretary V K Sasikala, her nephew and Deputy General Secretary T T V Dhinakaran and other family members from AIADMK as a pre-condition for talks.

"If these demands are met, there will be no other condition from us," K P Munusamy, key aide of former chief minister O Panneerselvam, said.

He said "confusing" statements were coming from various leaders of the CM's camp even on the issue of forming the panel to hold the merger talks.

However, Palaniswami camp leader and Rajya Sabha MP R Vaithilingam, who is heading the panel set up by the faction, said there was no confusion on their side.

The party had named senior ministers D Jayakumar, C Srinivasan, K A Sengottaiyan, P Thangamani, SP Velumani and C Ve Shanmugam as members of the panel, he said at a press meet at the AIADMK headquarters shortly after Munusamy met the media.

In signs of thaw on AIADMK merger move last week, the two sides had announced formation of committees for holding talks, but no headway was made in the last two days.

Finance Minister D Jayakumar had yesterday said he was prepared to vacate his ministry in favour of Panneerselvam if that would help forge unity of the party.

He had also said the doors for holding the merger talks were always open as the leaders were ready to discuss the issue "across the table".

"I am willing to give up all portfolios held by me for the betterment of the party and for the party's unity, after getting the approval of Chief Minister Palaniswami," he said.

He was replying to a question on reports that Panneerselvam may seek the finance portfolio.

Munusamy today said although the opposition camp had announced setting up a panel for the purpose of merger talks, some in the faction were "contradicting it".

He said his camp thus expected the Palaniswami faction to invite them for talks since they were the ones who announced the formation of the panel first.

"But confusing statements are coming from different leaders there. One leader says a panel had been formed, while some other says it has not been so," Munusamy said.

"We believe they are confused and are not in a position to take decisions. Somebody else is directing them," he said without naming anybody.

Munuswamy said Sasikala was capable of "destroying" the party, while making clear their demand for her expulsion.

He also objected to an article in AIADMK mouthpiece 'Dr Namathu MGR' which he claimed had mentioned that the party was with Sasikala and Dhinakaran.

"This is coming from somewhere. This is not required," he said.

Countering the stand, Vaithilingam said, "We have sent messages to them, including to Munusamy but they have not contacted us. We have contacted Manoj Pandian (of OPS camp) who said they have set conditions and are not ready to come," he said.

On the key demands of rival camp, he said Panneerselvam was the Chief Minister for 60 days after Jayalalithaa's death and he himself could have recommended the CBI probe into the leader's death.

"Now there is a court case in this regard. If court says so, we are ready (to recommend a CBI probe)," he said.

Further, the Election Commission is looking into Sasikala's elevation as the party chief, Vaithilingam said, adding, "We will ensure unity in the party on the basis of what it (EC) says."

The Panneerselvam camp has moved the EC challenging appointment of Sasikala as the party's General Secretary succeeding Jayalalithaa, contending that it was done in violation of party rules.

On the merger talks, Vaithilingam added his side was ready to discuss "any concrete suggestion for the betterment" of AIADMK.