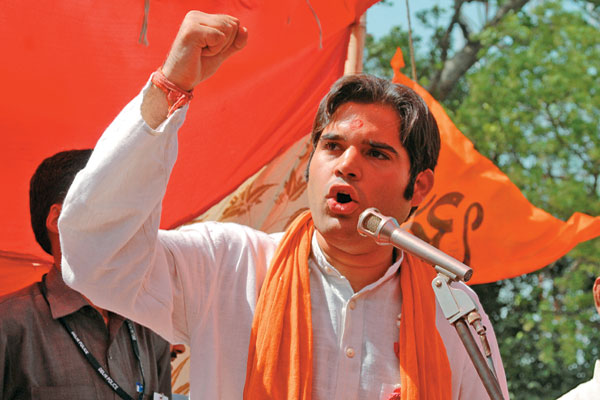 BJP MP Varun Gandhi, who is in the eye of a storm for allegedly leaking defence secrets to controversial arms dealer Abhishek Verma, today rejected the charges against him as false and frivolous and said he will take legal action against those who deliberately sought to tarnish his reputation.

The Sultanpur MP issued a detailed statement addressed to "my fellow countrymen," in which he made point by point rebuttal to the allegations levelled against him as he insisted that there is "no one grain of truth or one shred of evidence" in them.

"Clearly, I was neither actively seeking out nor passing on any information. Had there been any hidden agenda or motivation as alleged in the letter it would have been reflected in my attendance...

"I would like to point out the false and frivolous nature of its (letter) charges, and the impossibility of these allegations." Gandhi said.

Swaraj Abhiyan leaders Prashant Bhushan and Yogendra Yadav had on Thursday released a letter written by Edmonds Allen, a New York-based lawyer, to the PMO last month that Varun was honey trapped and compromised by Verma.

He alleged that Verma "blackmailed" Varun, a member of the Defence Consultative Committee, into sharing sensitive information on crucial arms matters.

Allen, who was a partner of Verma, fell out with him in 2012. Verma is facing trial in the 2006 Naval War Room leak case.

"I have never met Edmonds Allen, who has written this letter containing these allegation. Nor do I have any details of who he is, not what he does except as has been reported in the press of him being a former associate of Abhishek Verma," Gandhi said in the statement.

"I first made acquaintance with Verma whan I was a college student in England. He was introduced as the son of late Veena and Shrikant Verma, both Members of Parliament from a reputed family. We met socially over a short period of time. It has been many years since we last met. At no point did we ever discussed work, neither his nor mine," he said.

Bhushan alleged that despite having all the details, BJP government did not blacklist Thales, the company that sold scam-tainted Scorpene submarines, as Dassault acquired it.