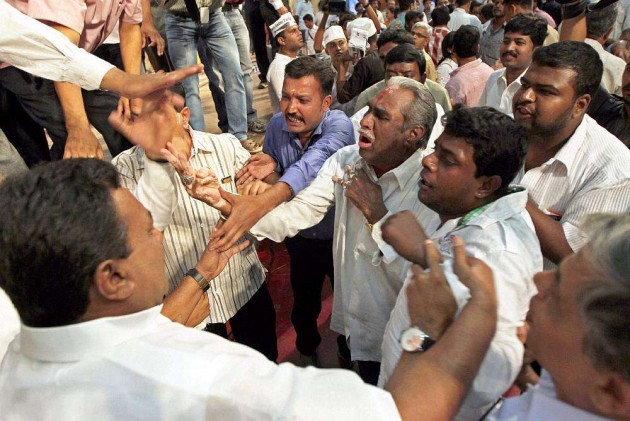 Chaos broke out today at a political debate between Congress' nominee for Bangalore South Lok Constituency Nandan Nilekani and BJP's Ananth Kumar after workers of the two parties created a ruckus, forcing organisers to abandon the event midway.

As Kumar began reeling out statistics to attack the Manmohan Singh government, Congress workers grew restive and resorted to sloganeering only to be countered by BJP workers who chanted "Modi, Modi." Congress workers shouted pro-Rahul slogans.

Biotech major Biocon chief Kiran Mazumdar-Shaw was moderating the debate at the event organised by Bangalore Political Action Committee (BPAC) which she heads. BPAC is a citizen's collective initiative that aims to build a better Bangalore and enhance the quality of life of citizens.

Both Kumar and Nilekani tried to bring the situation under control but in vain as slogan-shouting from both sides and heated exchanges escalated.

Earlier when Nilekani was addressing, a few members from the audience shouted slogans demanding he speak in Kannada.

Kumar told reporters that he was giving facts and figures about how the economy has crumbled in the last ten years but Congress supporters had no patience to hear.

"They never wanted to discuss the real issues. Like price rise, economic crisis, security failures relating Bangladesh and China border, regarding terrorism and Maoist attacks inside the country."

Nilekani, however, accused Kumar of losing track and deviating from the topic.

"It's extremely disappointing that we have an MP who has no interest in talking about his agenda," Nilekani said. "When Ananth Kumar was asked about his agenda for Bengaluru, rather than answering the question he began attacking the central government."