Death Toll In The UK Parliament Attack Rises To Five 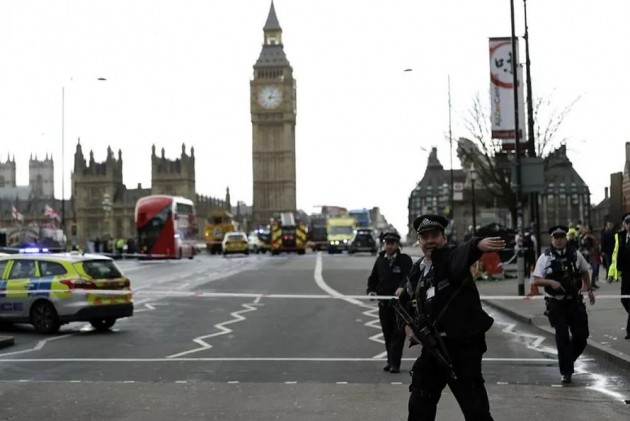 Print
A
A
A
increase text size
Outlook March 24, 2017 09:40 IST Death Toll In The UK Parliament Attack Rises To Five

The death toll from a brazen terror attack on the UK Parliament has risen to five after one more victim succumbed to his injuries at a hospital.

The 75-year-old man had been treated there prior to his death, a spokesperson for King's College Hospital in south London confirmed.

"Detectives investigating the terrorist attack in Westminster on March 22 can confirm that the man died tonight March 23," a Scotland Yard spokesperson said.

"The man had been receiving medical treatment in hospital following the attack and life support was withdrawn this evening. Next of kin have been informed and are receiving support from specially trained family liaison officers," the spokesperson said.

The man has not yet been named.

Two people - American Kurt Cochran and Spaniard Aysha Frade - were also killed and about 40 others were injured when the 52-year-old British-born attacker, identified as Khalid Masood, mowed down pedestrians on a bridge and stabbed to death a police officer outside parliament complex in the heart of Westminster before being shot dead by Scotland Yard.

Masood, who was born in Kent and had previously been convicted of violent offences, had been known to MI5 but was considered to be a peripheral figure. He was known by a number of aliases and had been living in the West Midlands recently.

Prime Minister Theresa May had said the attacker was British-born and he was once investigated in relation to concerns about violent extremism few years ago.

The ISIS on its propaganda news agency 'Amaq' had claimed responsibility, saying a "Soldier of the Caliphate" carried out the attack on the British Parliament.

"The operation was carried out in response to calls to target coalition countries," it said in a statement.

Eight people have been arrested during raids across London and Birmingham following the attack on the Palace of Westminster in London, which houses Britain's Parliament and the iconic Big Ben.

In a message to the police, British Queen Elizabeth II said, "My thoughts, prayers and deepest sympathy are with all those who have been affected by the awful violence."

Among 40 injured, 29 were admitted to hospital including 12 Britons, three French children, two Romanians, four South Koreans, one German, one Pole, one Irish, one Chinese, one Italian, one American and two Greeks.