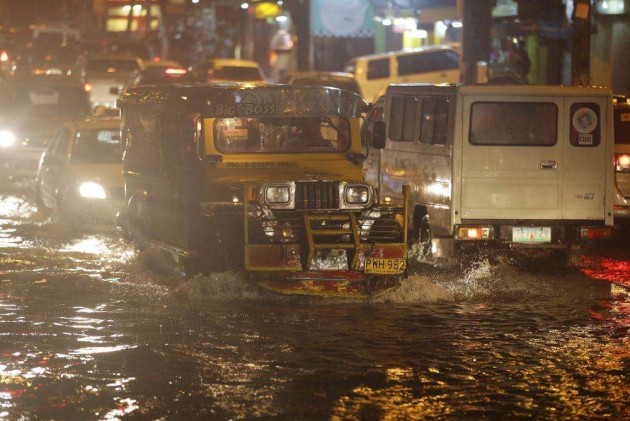 Heavy rains pummelled the entire Philippines today, threatening to aggravate flooding that has prompted the government to declare a state of "national calamity".

The death toll after a week of devastating weather has risen to 35, according to confirmed reports from national and local disaster monitoring agencies.

A tropical depression that has weakened into a low pressure area brought rains to the central Visayas islands and Mindanao, the main southern island, according to the government weather station.

Cold monsoon winds blowing from the northeast brought rains to Luzon, the main northern island, where large farming communities have been submerged in mostly waist-deep floods from Typhoon Melor, which hit at the start of the week.

Areas inundated by Melor have barely recovered from floods brought by Typhoon Koppu in October.

"We expect the rains to peak today. The weather will start to improve tomorrow," he said.

President Benigno Aquino declared a state of national calamity to "hasten the rescue, recovery, relief and rehabilitation efforts," according to his spokesman, Herminio Coloma.

The weather bureau issued a warning of up to 30 millimetres of rain per hour in the central islands of Cebu, Negros and Bohol, while residents were advised to be on alert for possible evacuation.

The three Visayas islands, with a combined population of 7.4 million people, are home to major tourism, trading and agricultural hubs.

Close to 10,000 people were evacuated from the poor farming region of Caraga in Mindanao before the latest storm, locally named Onyok, made landfall last night, the national disaster agency said.

There were no immediate reports on the effects of the storm early today.

In Luzon, 140,000 people displaced by Melor remained in evacuation centres.

The Philippines, a nation of 100 million, is battered by an average of 20 typhoon per year, many of them deadly.