He asked the people to take a pledge and express their commitment to building a new India on his Narendra Modi Mobile App. 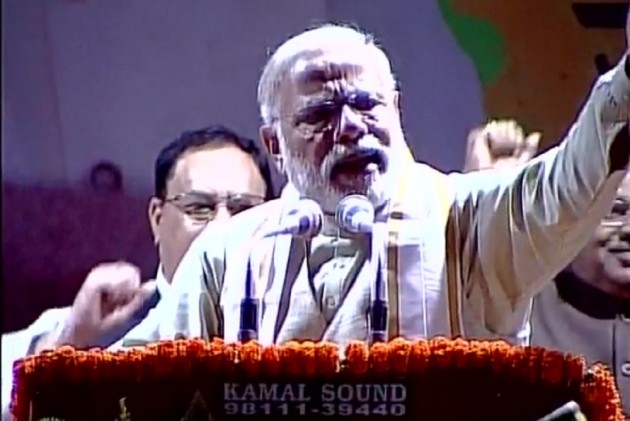 A day after the massive poll victories in Uttar Pradesh and Uttarakhand, Prime Minister Narendra Modi today appeared to be setting his sights beyond the 2019 Lok Sabha elections as he asked the countrymen to join him in building a ‘new India’ by 2022.

He asked the people to take a pledge and express their commitment to building a new India on his Narendra Modi Mobile App.

“A new India is emerging, which is being powered by the strength & skills of 125 crore Indians. This India stands for development,” Modi tweeted.

“When we mark 75 years of freedom in 2022, we should have made an India that will make Gandhi Ji, Sardar Patel & Dr. Babasaheb Ambedkar proud,” he added.

In a statement on his website Narendramodi.In, the Prime Minister said, “Together, let us build the India of our dreams so that when we mark 75 years of freedom in 2022, we have an India that will make Gandhiji, Sardar Patel and Babasaheb Ambedkar proud.”

He said, “India is transforming, powered by the strength of each and every citizen of India; an India that is driven by innovation, hard work and creativity; an India characterized by peace, unity and brotherhood; and an India free from corruption, terrorism, black money and dirt.”

He also listed out a set of pledges which he wanted the countrymen to take.

The Prime Minister also wanted the people to pledge that they will support and encourage women-led development, that they extend complete support to an ‘accessible India’, that they will stand for an India of peace, unity and harmony and that they will be job creators, not job seekers.

This came a day after the BJP, powered by a spirited campaign by Modi, posted landslide victories in Uttar Pradesh and Uttarakhand, decimating the rivals.