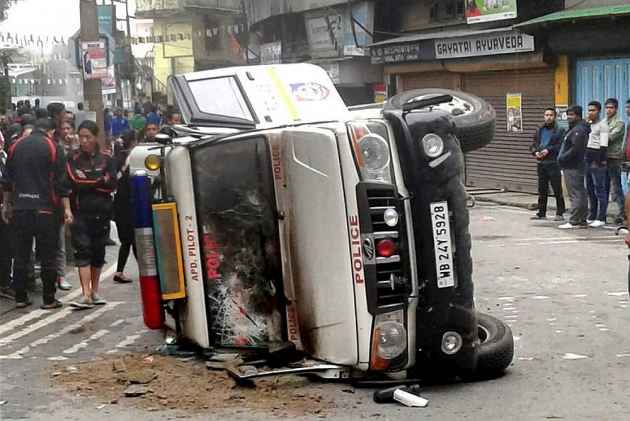 A GTA office was set on fire and several vehicles were damaged in Darjeeling today as the indefinite shutdown in the hills entered the 29th day.

The Gorkhaland Territorial Administration (GTA) office for travel and tourism in Chowrastha of Mall Road in Darjeeling was set ablaze by pro-Gorkhaland supporters early morning. Several government vehicles were also damaged near the Darjeeling station by unidentified men last night.

A railway station in Gayabari area of Kurseong was set on fire by pro-Gorkhaland supporters this morning. A forest bungalow near Teesta river was also set on fire today.

Meanwhile responding to the call of the Gorkhaland Movement Coordination Committee (GMCC), a writer and a singer returned the awards given to them by the state government.

GMCC is a body comprising 30 members who are representatives of all hill-based parties like GJM, GNLF, JAP and Bharatiya Gorkha Parisangh. The GMCC is headed by a member of GJM.

Writer Krishna Singh Moktan, who is also the former Darjeeling inspector-general of police, has returned his Bhanu Bhakta Award in the morning. He received the award in 2004. Singer Karma Yonjan too has returned his Sangeet Samman award.

Both Moktan and Yojnan gave their awards to Nepali Sahitya Sammelan committee, who in turn will send those awards to the district administration.

While an Army column, comprising around 50 personnel, has been deployed in Kalimpong since Monday night, two columns have been positioned at Darjeeling and Sonada from Saturday after large-scale violence and arson took place in those areas.

The police and the security forces maintained a tight vigil at all entry and exit points.