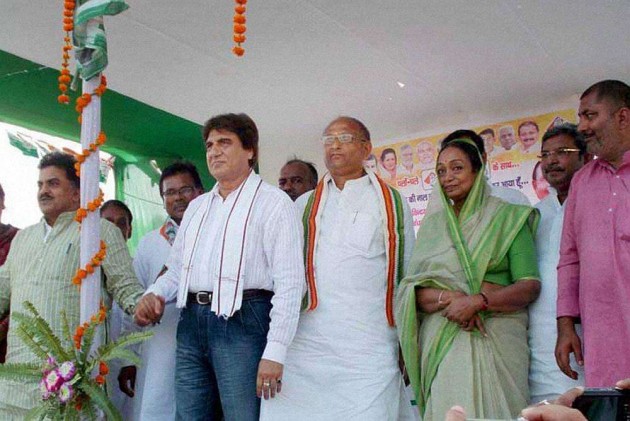 Congress leader Raj Babbar today accused Prime Minister Narendra Modi of being indifferent toward the woes of the common man, who felt cheated as the NDA government has failed to fulfil the promises it had made before coming to power.

Referring to the killing of Dalit children in Haryana, mob lynching in Dadri and skyrocketing prices of dal (pulses), the actor-turned-politician told reporters, "Dal (pulse), Dalit and Dadri (issues) will bring down Modi government."

Babbar arrived here to campaign for the upcoming local body polls scheduled to be held on November 22 and 29.

On the recently-held Bihar Assembly polls, in which the 'Grand Alliance' of JD(U), RJD and Congress won, Babbar said, "The BJP tried all tricks to win the Delhi and Bihar assembly elections...Although Prime Minister Modi addressed 31 rallies and BJP chief Amit Shah stayed put in Bihar, the poll results proved that Modi's attempts at cheating the voters in the name of development are now over."

"People of Delhi had already put a break on the expansion plans of BJP and RSS. In Bihar, too, where the BJP suffered a humiliating defeat, people stalled the growth the Sangh parivar. The Gujarat Assembly polls due in 2017 will be their last point."

Criticising the NDA government over its failure to check the rising prices of pulses, the Congress spokesperson said, "Today, everybody is feeling the pinch of the price rise. No one can afford to buy pulses, which have now touched Rs 200 per kg."

He alleged that the Centre as well as the Uttar Pradesh government were playing politics over the Dadri lynching incident and dividing people for political gains.

Modi is running a government of 'suit, boot and loot', Babbar said adding, "It has completed one-and-half-years in power, but every section of the society feels cheated by its words and actions."

Calling the PM an "actor", Babbar said in the film industry there are several actors who are bigger than Modi. "But the industry actors are honest people," he quipped.

The Prime Minister is not concerned with the common man's problems, he alleged and added, "This situation will improve pretty soon as the Congress will emerge as a renewed force in 2017 in the Uttar Pradesh Assembly elections and will also capture power in Gujarat assembly elections."

Congress is the only party in the country that talks about equality and social justice and does not involve itself in regional or communal politics like the BJP, he said.