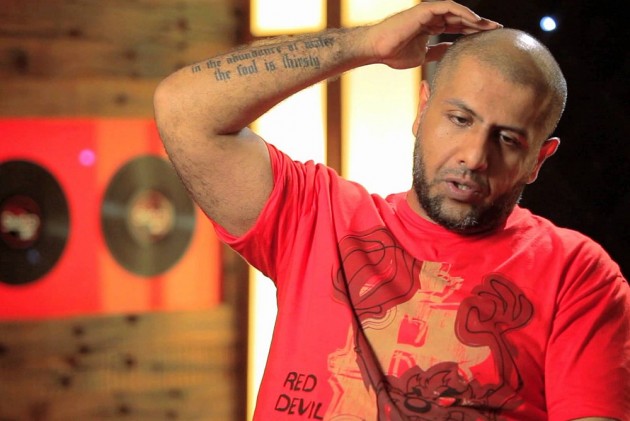 Music composer Vishal Dadlani today met Jain monk Tarun Sagar and apologised to him in person for his sarcastic tweet on the spiritual figure that had kicked up a storm.

The monk asked him to seek forgiveness from the Jain community for hurting their sentiments.

After the composer apologised as per the Jain community's tradition of seeking "Panch Mafee" that included holding of ears, Sagar said though he had already forgiven Dadlani, now he would appeal to the community to forgive him and withdraw protest against him and treat the matter as closed.

"I have been saying this right from the start when these events unfolded (when controversy broke out after Dadlani's tweet) that personally I don't feel hurt or sad. I was talking to Vishal today and I told him that Jain community has been hurt, it was their demand that he should come to me in person and apologise only after which they will stop protests against him.

"He came from Mumbai today and brought 'shriphal' from there to seek apology," Sagar said on Dadlani apologising for the tweet on the address made by the monk to the Haryana Assembly last month.

Sagar said, "Anyone can make a mistake, even me, it is not a big thing, but realisation of the same is important and one should forgive such a person."

"It was Jain community's request that if Vishal appears before me, he should be asked to seek Panch Mafee and the matter will end there," Sagar said.

After this, Vishal stood before Sagar with folded hands and was even made to hold his ears and apologised as directed that also included the composer saying that in future he will never hurt anyone's religious sentiments.

Afterwards, Sagar appealed to the Jain community to forgive Dadlani.

Sagar also appealed to those who had registered FIR against the composer to end the matter against him.

Dadlani later told reporters, "I apologised over Twitter 32 times and Tarun Sagarji also forgave me, but only thing is that I appeared in person now. I wanted to come personally earlier, but there was a FIR registered, so I did not want that people should feel that I have come here just because a case has been slapped against me."

"I felt it from my heart that my remarks generated so much controversy and people felt hurt.

Dadlani said after meeting "Guruji, I felt like we are friends. Before coming here I watched many of his pravachans and realised the good message he was sending across to the world."

Earlier today, Dadlani reached the Digambar Jain Temple, Sector 27 here and held a close door meeting with the monk that lasted for about 20 minutes.

Recently, a court in Ambala had directed music composer Dadlani to join investigation at Ambala Cantt Sadar Police Station today in connection with a case registered against him by Haryana Police for allegedly hurting religious sentiments with his alleged sarcastic tweet on the Jain monk Tarun Sagar.

Ambala Cantt Police had registered a case over three weeks back against Dadlani and one more person under relevant sections including 153A (promoting enmity between classes), 295A (maliciously insulting the religion or religious beliefs of any class) and 509 IPC (uttering any word or making any gesture to insult the modesty of a woman etc).

The case was registered on the complaint filed by Punit Arora, a resident of Ambala Cantonment and he is stated to be a follower of Jain monk.

The complainant said that the accused had hurt religious sentiments intentionally with his sarcastic tweet.

After a barrage of criticism, Dadlani had tendered an apology for his tweet and also deleted it.

The Jain monk had delivered a lecture 'Kadve Pravachan' at Haryana Assembly last month on the invitation of the state government.

Meanwhile, Dadlani reached Ambala during the day to join the police investigation in connection with the case against him.

He reached the office of the Assistant Commissioner of Police at Ambala City where he was questioned by the ACP and an SHO-rank officer for about an hour.

The police will file the report in the court of District and Sessions Judge, Ambala, where the case will come up for hearing on September 23.