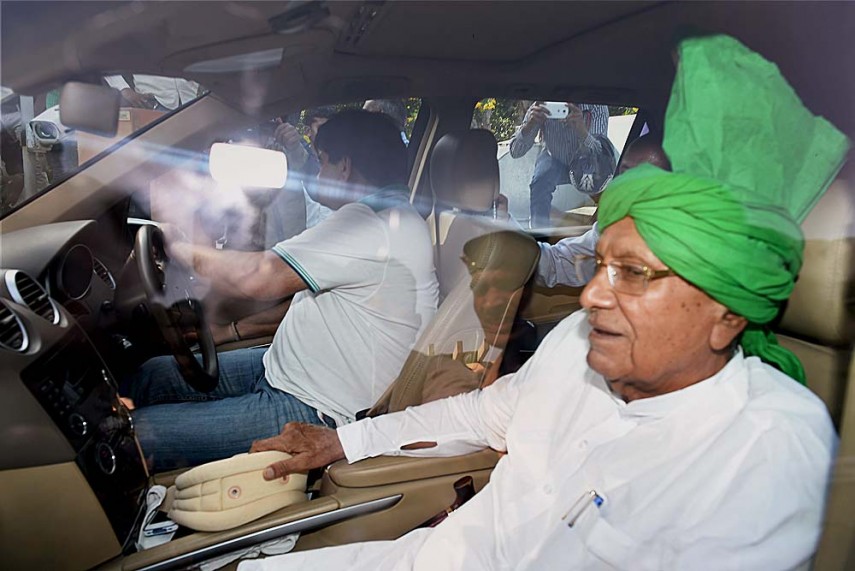 A Delhi court has issued production warrant against former Haryana Chief Minister O P Chautala, serving 10-year jail term in teachers' scam and facing trial in a disproportionate assets case, for August 12 after being informed that he was under medical observation in jail.

The court directed the jail authorities to produce Chautala before it on the next date of hearing in the DA case in which it was recording statements of prosecution witnesses.

Special CBI Judge Sanjay Garg-I received an intimation from jail superintendent that 81-year-old Chautala was admitted in a medical investigation room of the jail and could not be produced.

Till now the court has recorded statements of 95 CBI witnesses in the case.

"Put up for prosecution evidence on August 12, date already fixed. Fresh production warrant of the accused be also issued for August 12," the court said.

The court had earlier taken Chautala into custody in the DA case after a man sought to withdraw his surety bond furnished for the politician's bail.

Chautala is in prison after being sentenced to a 10-year jail term in the JBT scam case. He is serving imprisonment for illegally recruiting 3,206 JBT teachers in Haryana in 2000.

CBI had on March 26, 2010 chargesheeted Chautala indicting him for allegedly possessing assets worth Rs 6.09 crore, far exceeding his legal income between 1993 and 2006. Two such cases are going on against his sons, Ajay and Abhay.

Earlier, all the three cases, being heard in different courts, were transferred to one court on CBI's plea that these cases be put up before a single judge as trials in different courts would lead to inordinate delay in concluding them.

In its charge sheet, the CBI had alleged that Chautala's wealth was 189 per cent more than his income of Rs 3.22 crore during the period.

The CBI had also said that Ajay was possessing assets exceeding his legal income by 339.27 per cent. His legal income between May 1993 and May 2006 was Rs 8.17 crore, but had acquired assets worth Rs 27.7 crore, it had alleged.

Abhay allegedly owned assets worth over five times his income of Rs 22.89 crore as per income tax records during the 2000-2005 period. The agency claimed to have found Rs 119.69 crore worth of assets.

All these charges have been denied by Chautala and his sons.