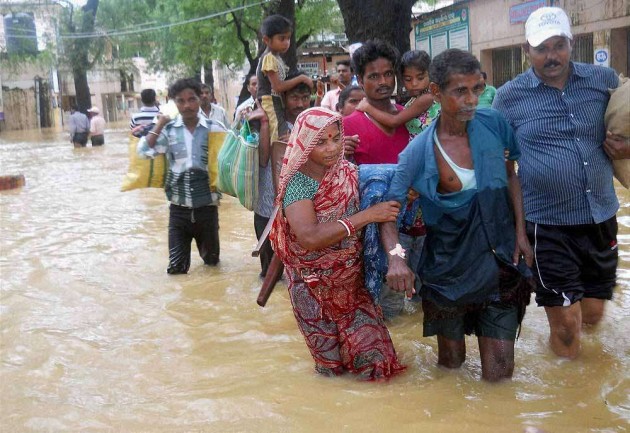 The Odisha government today said it would prepare a memorandum to seek central assistance in the next two days for relief and restoration works in the cyclone and flood affected districts, even as the death toll in the twin calamities mounted to 44.

"Death toll in the cyclone and resultant floods rose to 44. While 21 people died of cyclone, 23 others succumbed to floods," Special Relief Commissioner (SRC) P K Mohapatra told reporters, adding, that one more body was recovered from Bhadrak district.

Only 14,400 people, out of over 11.54 lakh evacuated during the calamities, were in relief camps today while others have left for their homes, he said.

"We have sanctioned about Rs 250 crore for relief and restoration works, but have so far not received any financial assistance from the Centre," the SRC said.

Putting the number of affected people in the cyclone and floods at 1.24 crore, the state government maintained the number of disaster-hit villages in 17 districts was 18,117.

"Drinking water has been provided to 75 per cent of people. Relief and restoration work is also picking up," said Chief Secretary J K Mohapatra, adding, the state government would prepare the memorandum to be submitted to the Centre in two days.

Stating that Ganjam, Balasore and Mayurbhanj were identified as the worst cyclone and subsequent flood-hit districts in the state, Revenue and Disaster Management minister S N Patro said, "Relief and restoration work was the focus for the government now."

Replying a question, Patro said over 2.21 lakh families have so far been provided with relief materials and the government is confident of covering all affected persons by October 22.

"We have so far distributed relief to 1.53 lakh people of the total 7.56 lakh affected persons in Ganjam," he said.

Stating that power restoration work was affected in some places due to acts of hooliganism, Patro said the home department would today issue a formal notification to book the miscreants under Essential Services Maintenance Act (ESMA).

The SRC has recommended suspension of five government officials on charges of dereliction in duties during relief and restoration activities.